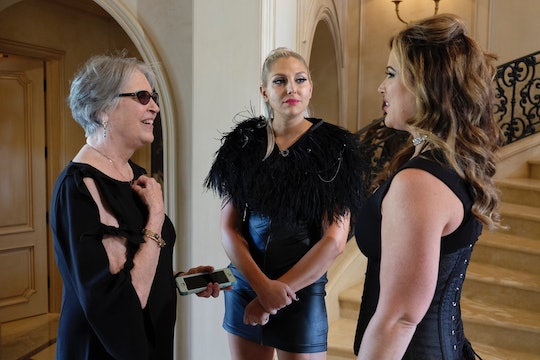 Emily Simpson’s first season as an official Real Housewives of Orange County housewife hasn't been easy. She was able to slide in and befriend some of the other women, but her own real life familial issues found their way to the surface and she was forced to deal with them. Like reuniting with her mom, who she hadn’t seen for a year prior to introducing her on the show. Of course this led fans to wonder, who is Emily Simpson’s mother on RHOC? Unlike so many of the other people on the show, she isn't part of the Orange County elite, but she comes from Emily’s own hometown back in Ohio and seems a lot more down to earth than you’d imagine the mom of a "real housewife" to be. But, as Emily explained to BravoTV.com, the reason behind losing contact with her mom for a year was her mom’s battle with depression. And it started long before RHOC was in Emily’s life.

Emily revealed that her mom’s struggle with depression began when Emily was six years old and her parents divorced. "As a child, my mother cried a lot, had irregular sleep patterns where she was up all night and slept all day. She spent hours on the phone with friends crying and discussing my dad," Emily said. "She had trouble handling everyday life. She talked a lot about my father and blamed him for all of her troubles. My mother has obviously suffered from severe depression and still does to this day."

As a result of her mom's depression, the women aren't close and it makes for a complicated family dynamic away from Emily's immediate family with her husband and kids. And as fans saw this season, Shannon Beador’s own battle with depression hit close to home for Emily.

Emily also told BravoTV.com that she saw similarities between her mom’s issues when Emily was a kid and Shannon’s issues in present day. As viewers have seen, Shannon spent the better part of the season struggling with her own divorce and dealing with the backlash from the other women, who eventually got tired of her state of mind and inability to see the good in any other aspects of her life.

"This comparison was in no way meant to be malicious or unkind, nor was it 'unethical' or 'unconscionable,'" Emily clarified, of the comparison she’d made on RHOC this season. "Witnessing Shannon’s behavior in Jamaica just made me hope that she is getting the help that she needs to have a happy and fulfilling life and to be able to move forward positively. She has such great things going on in her life, I just hope she can focus on those."

This eventually led to Emily reintroducing her mother to her kids after spending a year apart while her mom struggled with her depression away from the family. Now, it seems, they’re trying to mend the relationship that was tarnished by years of depression and extreme highs and lows. It’s unclear if Emily’s mom still lives back in Ohio, but it looks like she doesn't live close to Emily, so the visit this season was kind of a big deal. Judging by Emily’s Instagram, though, it paved the way for other visits and things seem to be on the right track for their relationship moving forward.

Season 13 of RHOC was the first chance fans got to really see into Emily’s private and personal life and her issues with her mom are a big part of that. Moving forward, I expect that it will be an ongoing storyline for her, especially if she and her mom keep at it with their relationship. It’s also a nice and legitimately real life look at one of the housewives’ lives rather than more of the same drama over brunch and mimosas. Although I’ll never say no to that kind of drama either.