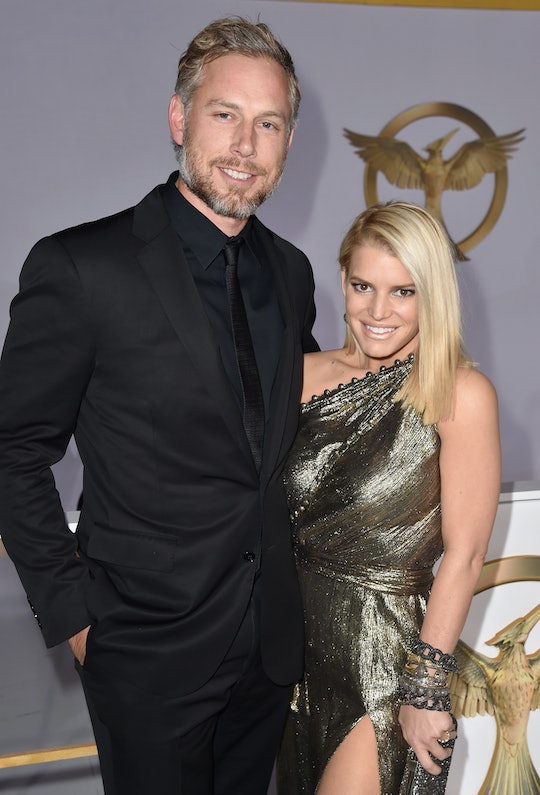 Singer/entrepreneur Jessica Simpson is enjoying her first weeks as a mom of three, having welcomed daughter Birdie Mae into the world on March 19. By her side for nearly 10 years now and three kids has been her husband and partner in parenting. But who is Eric Johnson? Jessica Simpson’s husband, as it turns out, had his own fanbase long before he ever met the talented star.

Johnson was a tight end in the NFL and played for the San Francisco 49ers from 2001 to 2007, according to People. During that time period, however, Simpson was married to Nick Lachey, according to E! News, and starring in the infamous reality show about their relationship.

More than just a high-caliber athlete, Johnson is a smart guy, too. He attended Yale for his undergrad degree, where he played football, according to Women’s Health. (Fun fact: His classmate was Jessica Alba’s husband Cash Warren. The couples attended a class reunion together.) Football isn’t his only sports success, however. E! News reported that he also played baseball and golf while growing up in Boston.

After retiring from football in 2008, it seemed that Johnson set his sights on the business world. When he met Simpson, he was attending a business program at the University of Pennsylvania’s prestigious Wharton School, according to People; he left the program to move closer to Simpson in Los Angeles.

Johnson was introduced to Simpson through friends in May 2010, according to E! News, and by July they were already vacationing together. A few months later, in November, they were engaged. Before they got married, Simpson was pregnant with their first daughter, Maxwell, who was born in May 2012.

They didn’t plan on having another baby so soon, but before they knew it the couple was pregnant again. According to Cosmopolitan, their son Ace was born in 2013. The pregnancies caused them to postpone their wedding twice, but they eventually made it down the aisle in a lavish ceremony in 2014, as E! News reported. The outlet reported the event lasted four days and came in at the pretty price of $1.4 million.

Though dating a high-profile celebrity is bound to put you on the radar, since the wedding, Johnson has done a pretty good job maintaining his privacy. He doesn’t have any obvious social media accounts, though that doesn’t stop Simpson from plastering photos of him and their family all over hers.

On Valentine’s Day 2019, for instance, she posted a sweet pic of the two of them and wrote, “I love him…he has taken my heart and loved me in every perfect way.”

One thing Simpson has never been shy about sharing is her attraction to Johnson. “He keeps me hot, I have to say,” the singer previously told Entertainment Tonight.

Of course, all that passion resulted in their third baby and Simpson shared a lot about her pregnancy this time around, including some of the challenges she faced. Very swollen feet and bouts of bronchitis were just a couple of the struggles, but it all turned out well when baby Birdie arrived.