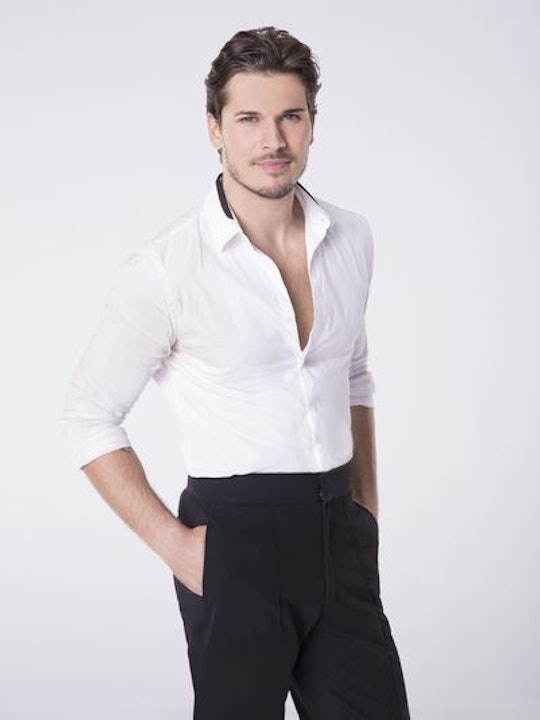 For Erika Jayne’s first performance ever on the Dancing With the Stars season premiere, she recreated part of her music video for her own song, "XXPEN$IVE", with her partner. And for their fast-paced, sensual, and totally empowering salsa, the pair scored a six with each judge. But fans are now probably wondering who Erika Jayne’s partner on Dancing With the Stars is, because Gleb Savchenko helped the Real Housewives star with a pretty strong DWTS debut.

There weren’t many extremely high scores given out during the Season 24 premiere, but since a lot of the stars in question are new to dancing and especially dancing live on TV, that was to be expected. Still, pulling a total score of 24 wasn’t bad for Erika and Gleb. But who is Gleb Savchenko on DWTS? Although this is only his third season dancing as one of the pros on the show, the professional Russian dancer has been dancing since he was eight years old. Before DWTS, he was on the Australian version of the show and, somewhere in between, he also competed on BBC’s Strictly Come Dancing.

But when he isn’t cha cha-ing or waltzing on live TV, Gleb is being a pretty awesome husband and father — and there are some seriously adorable photos available to back that up.

In 2011, Gleb welcomed his first child, Olivia, with wife and professional dancer Elena Samodanova. He also recently announced that they're expecting another baby girl in the near future. He told E! News, “I'm going to be a dad again, it's amazing. I have a girl and I think nothing is better than a little girl for daddies." It’s obvious that Gleb is an excellent dancer and dance partner for Erika on DWTS, but he also seems to know when to take off his dancing shoes and put on his daddy shoes.

The last time Gleb was on DWTS, for Season 23, he competed with actress/singer Jana Kramer and placed fourth with a final score of 35/40. For the same season, he and Jana scored similarly as he and Erika did for their first time on the floor this season and they only got better. So if history repeats itself, Gleb and Erika can go pretty far on Season 24 of DWTS.

When he’s not being a doting dad and apparently so adorably excited about having another girl, Gleb is totally bringing it either on DWTS or on the We Came to Dance DWTS tour. So even if you don’t know him as well as Maks or Sasha, he’s totally bringing his A-game this season and will make sure Erika is given all the knowledge and tools she needs to become a serious Mirror Ball competitor.