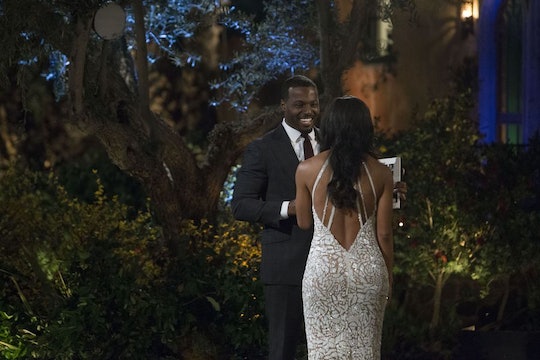 The contestant is definitely someone from Rachel Lindsay’s past, as viewers will soon find out, but it only gets more interesting from there. As it turns out, Fred knows Rachel from back when they were kids and she was his summer camp counselor. But don’t worry — the ick factor is very low with this one. In fact, Fred, 27, is just four years younger than the Dallas attorney whose love he’s going to be vying for on Season 13 of The Bachelorette, but apparently, he’s been holding a torch for her for years.

And I guess national television is the one spot where she basically has to address it and see if they possibly have a real connection. When Chris Harrison spoke to Yahoo TV about some of the Season 13 Bachelorette contestants, he had only nice things to say about Fred, which is good, but you’d better believe there is some awkwardness at first, a la Season 21 of The Bachelor when Nick Viall saw his one night stand from nine months prior step out of the limo that first cocktail night.

Hopefully Fred’s re-entrance into Lindsay’s life is a little more smooth though. "He gets out of the limo and there is an awkward moment where they don’t really talk about it, but she realizes who he is," Harrison said. "I believe they have kept in touch, but he has never told her how he felt as a kid… It is a very interesting, awkward, and exciting story." But besides being someone from Rachel’s past, there is a lot more to Fred from The Bachelorette. According to his own personal website, he’s had a pretty extensive education.

After graduating from Florida A&M University, he entered the MBA program and was eventually offered internships with both Caterpillar, Inc. and Ford Motor Company. But after interning with the film company Creative Mind Group, he went on to gain internships with The Hollywood Reporter in Toronto, Canada, as well as Paramount Pictures in both Park City, Utah and Cannes, France.

While maintaining his studies for his MBA, Fred also attended Florida State University's College of Motion Picture Arts graduate school and graduated with both a Masters of Business and a Masters of Fine Arts in Film Production in 2015. After college, he worked for the talent agency Creative Artists Agency and now, Fred works for Chernin Entertainment (which has produced movies like Hidden Figures and Mike and Dave Need Wedding Dates) in Los Angeles. But just like Rachel, he’s from Dallas. And if they do end up having chemistry on top of their history of already knowing each other, then it could actually work out.

It’s no big secret that plenty of aspiring models and musicians try out to be contestants on The Bachelor and The Bachelorette in order to further their careers, but it looks like Fred has already worked hard to build his own career, so there’s a good chance that appearing in Season 13 of The Bachelorette really is about telling Rachel how he feels rather than some sort of gimmick. Fred may end up being one to watch.