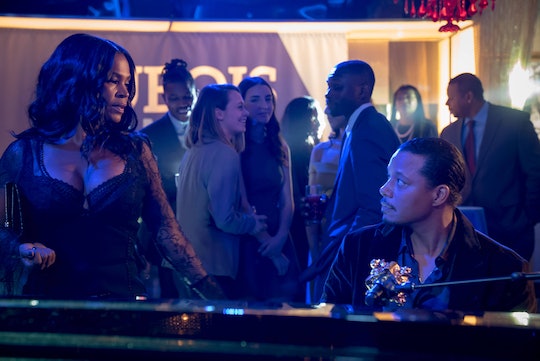 Giuliana Is Up To Something On 'Empire'

From the moment she appeared with the Vegas club owner who seemed to be all kinds of shady, it was clear that Nia Long’s character on Empire would play an important part in the show. But who is Giuliana on Empire and what do her business dealings have to do with the Lyon family? According to Deadline, Long’s character is a powerful force, as we’ve already seen by her interactions with pretty much everyone on the show, and judging by that alone, she’s probably going to butt heads with Cookie quite a bit.

While the Lyon matriarch can recognize a powerful woman when she sees one, she can also sense a snake in the grass, and with the way Giuliana shot her husband in cold blood and proceeded to casually do business with Andre and Shyne shows how ruthless the Vegas club owner must be. The outlet also calls Giuliana “a queenpin who runs a club in Las Vegas and makes brash moves in the gangster underworld of New York to secure a deal with Empire” and refers to the character as “sleek, sexy, and cold-blooded.” The character description also mentions that, as to be expected, she will go up against Cookie at some point.

Long is known best for her roles in Friday and The Best Man Holiday and some other big TV shows like House of Lies and Uncle Buck. She was also recently in the Lifetime revival of Beaches as well as 2016’s Keanu. So when her famous face appeared on Empire, it was obvious that she’d be someone important. And as she worked with Empire and continues to work on Andre (which, let’s face it, she totally is), Giuliana is definitely going to make herself known.

And since Cookie has been the steady fierce female in the series so far, apart from Anika, Giuliana and Cookie are obviously going to have it out for each other. Sure, Anika has been a thorn in Cookie’s side since she was released from prison at the start of Season 1 and came to Empire to claim what’s rightfully hers, but Anika is also nowhere near as ruthless and cunning as both Cookie and Giuliana.

She did push Rhonda down the stairs and ended up killing her later on, but she’s still never been as rough around the edges as Cookie, so Giuliana could be a huge adversary for not only her, but likely for Lucious too.

If you go back to the trailer for the second half of Season 3, there was a quick shot of Giuliana pointing a gun at Lucious. Of course, there’s zero context involved, but obviously she’s not just hanging around to work with Empire Entertainment, but rather to take something for herself. I, for one, can't wait to see how this all plays out.