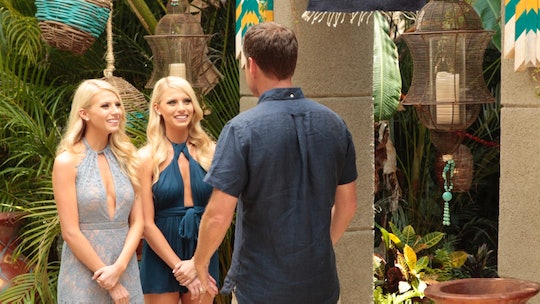 Emily has been dating the Vegas Golden Knights ice hockey player William Karlsson for almost two years. He is a far cry from the Instagram influencers and reality TV stars of Bachelor Nation and seeing how Emily has done in a long-term relationship, Haley no doubt wants the same for herself. I'm not sure if she is going to find that from John Paul Jones of all people, but Emily and Karlsson have set the bar high for a serious adult relationship in the family.

Emily's Instagram is full of photos with Karlsson, showcasing their romance and their daily life together. According to her Instagram, their official two year anniversary is in November and they seem like they are in this for the long haul.

Under one photo with Karlsson, Emily wrote a caption which included, "You’re the Cheeto to my Puff. You’re the Sugar to my Coffee. You’re the Pain to my Ass. Idk. I’m bored." They didn't take the Bachelor in Paradise approach and get engaged four weeks after meeting each other, but maybe Haley should take a page from their book and date someone outside of Bachelor Nation. It has worked for Emily, so it honestly couldn't hurt.

Karlsson is also Swedish and while he has played for multiple teams in the past, he is definitely one of the more up and coming professional ice hockey players out there. He recently signed a new $47.2 million contract with the Vegas Golden Knights, ensuring him a spot on the team's roster for the next eight years, according to Scout.com. He is the only Golden Knights player to have ever played in both regular and post-season games. He's kind of a big deal, so I can't really blame Haley for wanting to find her own Karlsson this season on Bachelor in Paradise.

Fortunately for Emily's twin sister Haley, it hasn't been so easy for her to slide into a relationship this season on Bachelor in Paradise. Haley went on a date with JPJ, who conveniently left out his attachment to Tayshia at the time. Now, Haley is involved in their love triangle, which is n basically a love square at this point, and it definitely puts a damper on Haley's Bachelor in Paradise Season 6 experience.

After JPJ made it clear to Haley that he wants to try and pursue things with Tayshia, despite her interest in Derek, Haley had a meltdown about finding love in Paradise. She said that even though men tell her she's fun, interesting, and can hold a good conversation, she still can't find someone worth holding onto. It was heartbreaking to watch. Maybe Karlsson can hook her up with an ice hockey friend so she doesn't have to deal with the toll Bachelor in Paradise can take on its contestants.

Hopefully, Haley can have an easier go at the rest of Bachelor in Paradise this season. Her sister might have found someone worth her time outside of the franchise, but Haley hasn't quite given up yet, so her determination has to be worth something.