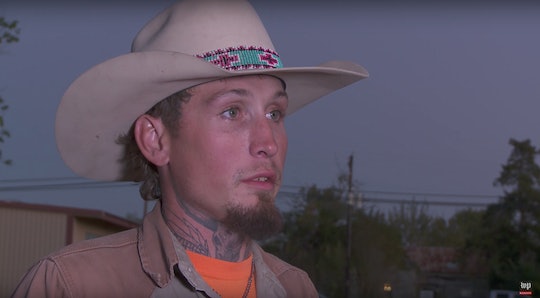 Amid the horrifying (but frustratingly familiar) cacophony of news reports that a gunman killed 26 people in a church in a small town in Texas Sunday, a hero's story emerged. Instead of looking into the background of the suspected killer — who died not long after completing his murderous rampage — let's take a moment to find out who Johnnie Langendorff is and how he affected the outcome of the tragedy. Along with another unidentified man, Langendorff ultimately pursued the suspect, chasing him away from the First Baptist Church of Sutherland Springs. It's horrible that a situation in which he had to step up even played out in the first place, but beyond commendable that he did.

Langendorff was actually passing by the church by chance shortly after the gunfire erupted during an 11 a.m. service. He was driving to his girlfriend's house that Sunday morning when he noticed an empty SUV idling in front of the church with its driver's side door gaping open, according to The Washington Post. Then, he saw two men — one with a pistol, the other with a rifle — shooting at each other before the one with the pistol took off in the SUV.

The man with the rifle reportedly lived near the church. "He briefed me quickly on what had just happened and said he had to get him,” Langendorff told The Washington Post later. “So that’s what I did.”

In Langendorff's truck, he and the other man sped off in pursuit of the suspect, reaching speeds of 95 mph and communicating with law enforcement all the while, Langendorff told The Washington Post. About 11 miles from the church, the driver of the SUV appeared to lose control of his vehicle and ended up in a ditch off the road.

Then, Langendorff told The Guardian:

That is when I put the vehicle in park and I was still on the phone to Dispatch [police]. The other gentleman jumped out and has his rifle drawn on him. He didn't move after that.

About five to seven minutes later, police arrived. The gunman was dead. Multiple media outlets reported that it was not immediately clear whether he had killed himself or whether he has succumbed to injuries sustained at the church. BBC News cited police in reporting that the gunshot wound from which the suspect died was self-inflicted. Meanwhile, 26 people ranging in age from 5 to 72 had died or were dying at the Baptist church, NBC News reported. Another 19 would be hospitalized after the suspect allegedly carried out the attack using a Ruger AR assault-type rife.

Langendorff has bullhorn tattoos on his neck and appears to gnaw on a toothpick as a habit. He hails from Seguin, Texas, and works at NAPA Auto Parts, according to his Facebook page. He told The Guardian he was "strictly just acting on what the right thing to do was," when he decided to pursue the suspect.

And it's hard to argue that Langendorff and his anonymous comrade didn't do the right thing. But the fact that the other man confronted the suspect in the church with a firearm shouldn't lend any credence to the NRA's widely trumpeted argument that, "The only way to stop a bad guy with a gun is with a good guy with a gun." The organization's leader, Wayne LaPierre, famously uttered what would become a pro-gun rallying cry after another gunman gunned down another 26 people (this time, 20 of them first-graders) at Sandy Hook Elementary in Newtown, Connecticut, in 2012.

One study, conducted by Texas State University's Advanced Law Enforcement Rapid Response Training (ALERRT) executive director, found that the vast majority of the country's mass-casualty shootings that occurred between 2000 and 2013 ended when the shooter killed himself, fled, or surrendered, according to Slate. Of the 160 incidents Blair analyzed, he found that police ended 45 of them and that civilians or off-duty police officer with guns took the suspect down in only seven cases. What's more, the NRA's refrain that more guns makes Americans safer has been repeatedly proven false by empirical study after empirical study.

Anecdotal examples reveal the shortcomings of the "good guy with a gun" argument, too. Just one month ago, for example, a gunman slaughtered 58 people attending an outdoor country music concert from the 32nd floor of a nearby Las Vegas hotel. How could a so-called "good guy" with a handgun have protected others from the spraying of bullets plummeting down from 32 floors above from what was essentially an automatic weapon? Additionally, a crowd of "good guys with guns" was powerless to disarm a sniper who opened fire and killed five police officers in Dallas last summer; law enforcement employed an explosive-toting robot to neutralize that suspect instead.

Yes, Langendorff and the other man displayed admirable bravery and an impressive selflessness Sunday. But to prevent others from having to do the same when a similar mass shooting strikes, the solution is not to infuse more guns into society.