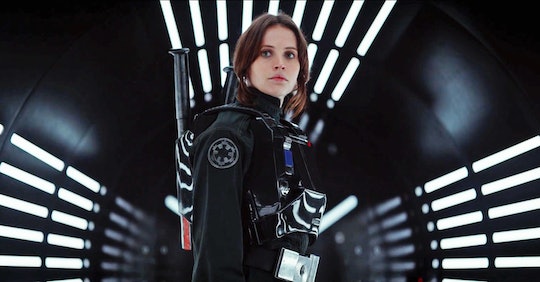 Who Is Jyn Erso In The 'Rogue One' Trailer? Felicity Jones Takes On The Strong Female Lead

The best thing about Disney acquiring the Star Wars franchise is that the mega-company really knows how to churn out films. They're definitely taking the beloved series and doing the most they can with it, creating sequel and spin-off films to fill the rest of their slate for the decade to the brim. The upcoming spin-off film, Rogue One: A Star Wars Story, just dropped its second official trailer today. The new trailer gives us a closer look at the film's lead, Jyn Erso. But who is Jyn Erso in Rogue One: A Star Wars Story?

From the moment she was introduced in the teaser, it was clear that Jyn was going to be the single most important character – our protagonist – even among the large, star-studded cast including Forest Whitaker, Mads Mikkelsen, and The Night Of's Riz Ahmed. The teaser opened with Felicity Jones' Jyn stating her name in response to a question, as her personality traits (reckless, aggressive, undisciplined, and rebellious) were listed off as she was recruited by the Rebel Alliance. The first full trailer expanded upon what was introduced in the teaser, with extra Rogue One team-building goodness and a few epic battle shots.

In the newest trailer released this morning, we finally got some actual information. Don't get me wrong – the first trailer and teaser were wonderful, and I totally got chills as soon as I watched them. But they were more atmospheric, as opposed to giving us the nitty-gritty actual plot details.

In the second full-length trailer, we were finally introduced to Mads Mikkelsen's character, who was absent from the first two sneak-peeks. We also got the context for why and how Jyn Erso was broken out of custody by the Rebel Alliance, so that she could join them. We now know that Jyn Erso is the estranged daughter of Mads Mikkelsen's character – we found out in an earlier sneak-peek that she'd been on her own for fifteen years – who was recruited by the Empire to build a super-weapon for them.

Even better, the newest trailer features plenty of Jyn Erso's character in an apparent position of leadership. At one point, she "rallies the troops" (as it were) by reminding them that rebellions are built on hope. It's clear that Jones' character will be the latest example of Star Wars' renewed commitment to giving us strong female leads, following in the steps of Princess Leia from the original trilogy and Rey from the new trilogy.

It's no surprise that many fans are already convinced that Jyn Erso is actually Rey's mother, something we probably won't have confirmed either way until the second or even third film in the new trilogy. My fingers are so crossed – I'm ready for that parentage to be canon.