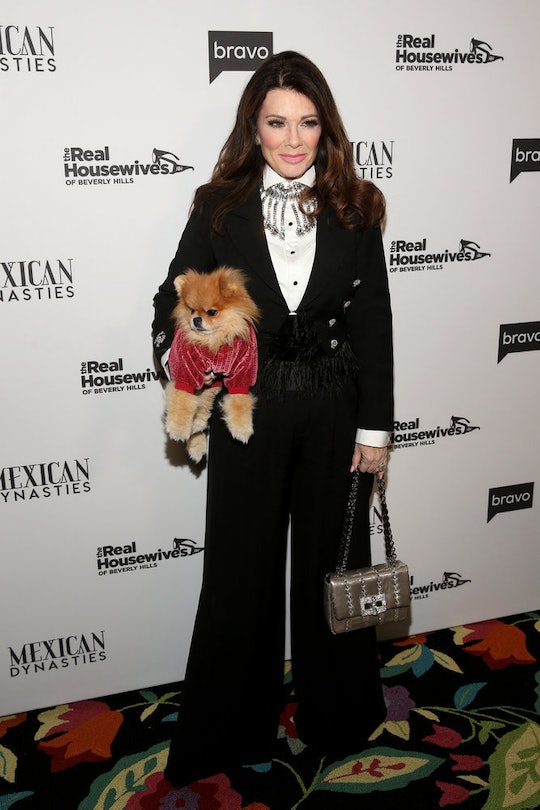 The Real Housewives of Beverly Hills is no stranger to dramatic events that outline each season, but somehow, a dog has been the focus of some of the drama in Season 9. Dorit originally adopted one of Lisa Vanderpump's rescue dogs, Lucy Lucy Apple Juice, but later gave her away after the pup allegedly bit Dorit’s husband and small children. But after all of the ensuring drama, fans might be wondering who Lucy Lucy Apple Juice is on RHOBH and what the big deal is. Since this was all for a dog of all things, it might seem a little silly in the grand scheme of things.

Lisa, who saw Dorit’s actions as a slap in the face, was outraged by her actions. According to Lisa on the show, she wanted the dog to remain in the Vanderpump Dogs rescue family, but instead of Dorit explaining the issue to her, Dorit gave the dog to someone else, who ended up surrendering the dog to an animal shelter. Luckily, the shelter scanned Lucy for a chip and saw to it that she go back to Vanderpump Dogs. Now, Lucy is in another home, but it took a while to get her settled and adopted with a family who wanted to keep her.

"Puppygate," as it will forever be known as on the show, sparked an all-out feud between Dorit and Lisa, who takes Vanderpump Dogs very seriously and is known across multiple Bravo franchises for her work with rescue dogs. Dorit probably couldn't have offended or angered her worse by giving Lucy away without explaining the situation to her. It’s unclear how serious the bites were or if Dorit’s story checks out, but her reason for giving up the pup so soon after adopting her were the bites Lucy allegedly left on Dorit’s family.

According to People, Lucy is now in a new home with model Zandria Theis whose friend worked for Vanderpump Dogs at the time when all of this drama went down and Lucy was returned to the foundation.

"I knew from the second I saw her that we were going to adopt her, but we fostered her for about a month," Theis, told the magazine. "When we first got her, she was extremely terrified of everything. I don’t know what happened behind closed doors, or at the house where she was at before I got her, but all I know is that when I got her she was terrified."

It’s not clear who Dorit gave Lucy to before the dog ended up at a rescue shelter, but needless to say, Lisa wasn't happy about any part of Lucy’s story, even if the pup is happy and in her forever home now. "That first month where we were fostering her it took that entire time for her to gain trust in us," Theis, who renamed Lucy Lulu, told People in the same interview. "It took her months and months of work to get her where she is today, and now she is the perfect dog."

She also said that the dog formerly known as Lucy Lucy Apple Juice hasn't bit her or her boyfriend, who have taken to dog parenthood with the small pup. She said that they have worked hard to teach her that biting out of aggression isn't OK and that so far, Lulu has been obedient. Theis didn't have any comment on who might have been responsible for Lulu’s behavior before she ended up in their home or what happened to the dog while she lived in Dorit’s home for a short time, but there is no denying that puppygate has dominated the drama in RHOBH Season 9.

No matter how much Dorit tries to explain away what happened, chances are, Lisa won't soon forgive her. But the one good thing to come out of all of this is that Lucy Lucy Apple Juice now has a new home and she’s happier than ever.