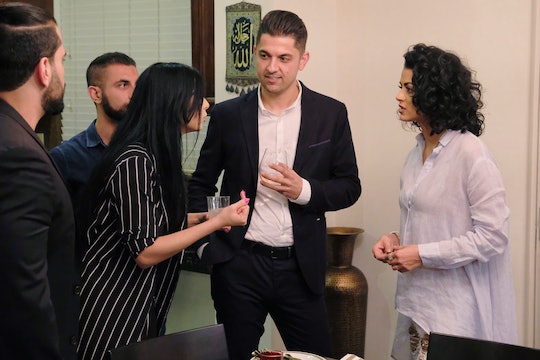 In Thursday’s episode of Shahs of Sunset, Nema Vand surprised fans and co-star Golnesa "GG" Gharachedaghi alike when he revealed that prior to his most recent relationship, he was actually married. As fans know, he had a relationship that lasted for several years with his now ex-girlfriend Erica Saunders. But apparently she wasn't the first serious relationship he had. So fans are curious: who is Nema Vand’s ex-wife? While fans know a little about Nema's ex-girlfriend, not much is known about his relationship with his wife.

On the show Nema explained that he met his wife when he was very young and married her soon after. "I met my ex-wife when I was 18 years old at a party," he said to GG. "And I said, 'Who is that? I’m gonna marry that girl.' She and I had a very aggressive relationship, but the sex was great. It was a lot of fun." He then joked that thanks to the eight-year marriage he lost a lot of weight — and gained "$10,000 in therapy bills." Nema did not, however name names or give any other indication of his ex-wife's identity. Presumably the two haven't been close for several years, so fans are probably safe in assuming she's just off somewhere living her own best life.

But, naturally, it does make you wonder more about Nema and his dating and relationship history. As soon as he was introduced in the Shahs of Sunset Season 7 premiere, it was apparent that Nema had a thing for GG. And despite having a live-in girlfriend, Erica, at the start of the season, he went so far as to try to kiss GG shortly after their first meeting. (She politely declined). Right now, GG and Nema seem to be more like friends than anything else, but Nema’s attraction to GG definitely didn't help his relationship with Erica.

As viewers have seen this season on Shahs of Sunset, Erica and Nema were in a long-term relationship before she heard about the almost-kiss. That's when she suggested the two go on a break (understandable). The break then turned into Nema moving into a place of his own, so I'm going to go ahead and guess they're officially broken up. Erica is good friends with his sister, Mona, however, so this may not be the last viewers will see of her.

Nema is a Shahs of Sunset newcomer this season, and his flirtation with GG was the catalyst for his storyline. Unfortunately for him though, GG doesn't seem to feel the same way. She spoke to Entertainment Tonight ahead of the Season 7 premiere and revealed that she’s not really looking for romance with anyone right now. "Nema's a sweetheart," she said. "I think we have a roller coaster of a situation the entire season, but it starts out with an extremely bold move on his behalf, which was to try and make out with me, like, four or five hours after meeting me."

That said, Nema seems intent on making it past the friend zone with GG. There isn't much information out there about Nema’s ex-wife or their marriage, but it definitely doesn't look like the guy is scared of commitment. Shahs of Sunset airs on Bravo Thursdays at 9 p.m. ET.