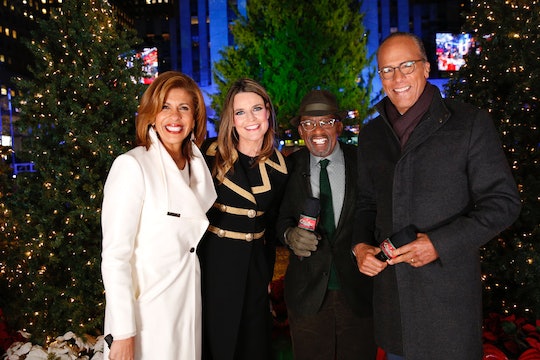 The only thing more magical and fun to watch on TV during the holidays than actual Christmas movies is the televised Christmas tree lighting at Rockefeller Center. Every year, performers and musical artists come together to make the event extra special and this year is no different. So if you’re wondering who is performing at the Christmas in Rockefeller Center special, you probably aren't alone. The lighting of the 72 foot tree is spectacular on its own, but in the live televised special leading up to the actual lighting event at on Nov. 28 at 8:00 p.m. ET on NBC, there will be several different hosts, including Mario Lopez and Tony Danza. The Christmas at Rockefeller Center special will be hosted by Al Roker, Savannah Guthrie, Hoda Kotb, and Craig Melvin from Today.

The performers scheduled to appear on the special include Diana Ross, Kellie Pickler, John Legend, Pentatonix, and Tony Bennett, with a special appearance by Howie Mandel. Billy Porter and the PAL Cops & Kids Chorus in New York will also perform during the live event and Rob Thomas and the Radio City Rockettes were recently added to the roster. As per usual, it’s bound to be an event full of excitement and festive holiday spirit. Obviously nothing beats actually being there in person, but it’s still another fun holiday tradition that millions of families enjoy from the comfort and warmth of their homes. I’d love to be out there watching Diana Ross in person, but I also don't mind being able to feel my fingers as I watch the performers from home.

All of the fun starts on NBC at 7 p.m. ET with the pre-show hosted by Lopez and the actual special begins at 8 p.m. ET. The actual tree lighting won't likely happen until around 9 p.m. ET, so there will be plenty of festivities, dance numbers, and Christmas songs being belted out by the handful of A-list performers set to appear beforehand.

Ross, who wasn't among the performers at the Christmas special in 2017, will likely be singing some familiar Christmas songs on stage during the live television event which makes sense since she just released a new Christmas album. And Legend’s role in the Christmas in Rockefeller Center special comes as no huge surprise since his own special, A Legendary Christmas with John and Chrissy, will air at 10 p.m. ET following the yearly holiday event. His first ever Christmas special with wife Chrissy Teigen and some other guest stars involves singing Christmas carols to unsuspecting people on their doorsteps, so it’s going to be a night full of Christmas cheer.

Diana Krall, who will also be one of the performers at the special and who released an album with Bennett in September, told iHollywoodTV that she takes her role as a performer at the event seriously, especially given what the Christmas tree lighting represents. "To perform at Rockefeller Center in this incredible tradition… to look out, to see everybody together, to see my husband, to see my sister, to feel the love of my husband… it’s all about love here and you really feel that," Krall said.

Performances from dance troupes and musical artists will take up most of the holiday special and will likely be sprinkled in throughout the broadcast, so it's probably best to watch the whole thing. I don't think there’s really a question about that since watching the tree lighting itself is a holiday tradition for so many, whether they are there in person or watching from home. The Christmas in Rockefeller Center special kicks off at 8 p.m. ET on NBC.

More Like This
The Best Bluey Costumes For The Whole Family
The Office Halloween Episodes: A Definitive Ranking
Kim Kardashian Stars In Hilarious House Of The Dragon Parody, The Targashians
Lifelong Teacher Dr. Jill Biden Loves Watching Abbott Elementary Too