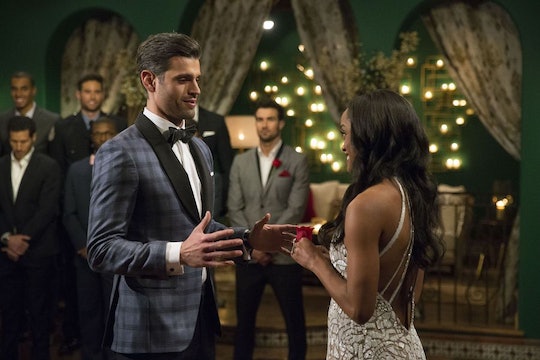 Peter May Be One To Watch On 'The Bachelorette'

Every season of The Bachelorette has a roster of gorgeous men who step out of the limo and try to set themselves apart from the rest. Some are more successful than others. Some even have some very questionable job titles (like Tickle Monster). But others manage to come across as just downright charming. At least, for the first few weeks anyway. And one guy, who's from the same state as the former Bachelor Nick Viall, seemed to have caught Rachel's eye on the Bachelorette Season 13 premiere. So, who is Peter on The Bachelorette?

The Wisconsin native may hopefully help Rachel see the men from his state in a different way than how she sees them now, thanks to Nick breaking her heart last season on The Bachelor. OK, that's probably a little dramatic, but it could either be a sign that she'll fall in love with him or a signal that their relationship (much like hers with Nick) just won't work out. Only time will tell, though. He may not have been the recipient of the coveted first impression rose, but he did get the first rose during the Rachel's first ever rose ceremony of Season 13 and that has to mean something, right?

When filming began for Season 13 of The Bachelorette, Rachel appeared on The Ellen DeGeneres Show with a small portion of the contestants, and surprise — Peter was among them. So he's obviously been a favorite since she first saw him step out of that limo.

In the Facebook Live video in which Chris Harrison introduced all of the Season 13 Bachelorette contestants, he said to "watch out" for Peter, but by all accounts, the contestant seems like a genuine and successful guy. He's a personal trainer, but also owns his own business and in 2012 was named by Time Out Chicago as one of the city's hottest trainers.

Peter founded his company, Worth Personal Training, in 2009 and while he's dabbled in modeling, personal training is clearly where his head's at more these days. From his Instagram, though, you can tell that there's not much that's superficial about the Bachelorette contestant, as he posts plenty of photos with family including, of course, his mom.

The whole love of his family thing definitely makes him a contender for Rachel's heart and that final rose all of the guys are already itching for. Seriously, I can't remember a more eager group of guys on the show, but then again Rachel is a total catch, so it's kind of understandable.

Peter didn't get the prized first impression rose on the Season 13 premiere of The Bachelorette, but he's obviously a catch and Rachel seemed to know that right off the bat too.