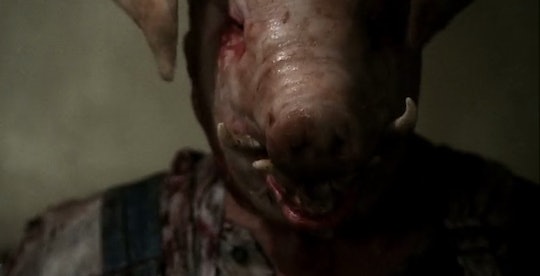 Who Is Piggy Man On 'AHS: Roanoke'? His Backstory Is Seriously Disturbing

With the Season 6 finale of American Horror Story coming fast, it's time to get down to brass tacks. And in this case, that means finally revealing details behind the ever-mysterious season of AHS: Roanoke. And now that viewers have heard about the truth behind the murderous figure running around with a pig's head on top of his own, it's time fans return to a very important question: who is Piggy Man on AHS: Roanoke exactly? I don't know about you, but I was ready to chalk up Piggy Man to just another unsolved mystery of the Roanoke woods and call it a day, but Jether Polk (Finn Wittrock) surprised viewers by telling his captive, Lee, the actual story behind the pig head-wearing psychopath. And—big surprise—Piggy Man is a member of the Polk family too.

According to Jether, Piggy Man (or, Kincaid, for those who prefer his actual name) was a serial killer around the time of the World's Fair. This wouldn't be the first time AHS took on a serial killer from that era, though, with James March from Hotel greatly resembling the World's Fair murderer H.H. Holmes. Kincaid was a different kind of murderer, though, as Jether's story described in horrific detail. Because, hey, when isn't someone's backstory on this show seriously twisted in unthinkable ways?

Inspired by The Butcher (naturally), Kincaid evidently had a penchant for hanging people up, skinning then, and gutting them, much like you would see in a slaughterhouse, all while wearing the pig head mask on his head. It's still unclear as to why Kincaid became Piggy Man on AHS: Roanoke or what exactly happened to him to make him part of this Roanoke tale, but as a member of the Polk family, you kind of have to assume that murderous tendencies were simply in his blood.

Now, it's pretty obvious that Piggy Man died and is one of the resident ghosts on the Roanoke farmhouse property, but how he died years ago is still one of the many AHS: Roanoke mysteries. Learning about who Piggy Man is though, served as a perfect throwback to AHS: Murder House, during which one of Dr. Ben Harmon's patients had a fear of urban legends, and of one in particular about a butcher from Chicago in 1893.

The patient told Ben that the butcher would string up his victims while wearing a pig mask and slaughter them. Sound familiar? According to the story, Piggy Man was eventually killed by his own pigs, but does that mean back in Chicago or on the farm?

AHS: Roanoke has exactly two episodes left this season to answer the more important questions, so if that's all fans get about Piggy Man, it should tide them over until AHS visits Murder House once again in future seasons.