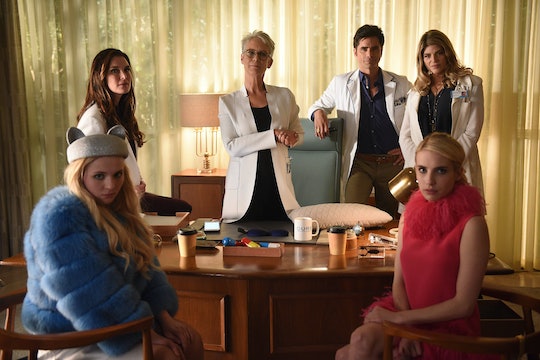 Who Should Return For 'Scream Queens' Season 3?

The blood has barely dried from the final Green Meanie attack and the Chanels still haven't paid for any of their awful ways, but it's honestly never too soon to start thinking about Season 3. And even though there hasn't been an official renewal announcement yet, it's totally also OK to ask: who is returning to Scream Queens Season 3? Because there are some pretty obvious candidates who would make total sense to see return to the FOX horror/comedy series.

Although Season 2 of Scream Queens ended with general closure for the season and the main storyline, the final scene with the Red Devil showing up in the back seat of Chanel's car sort of set things up for a new season with a throwback to the first season. But who will be in Season 3 of Scream Queens, then? Obviously Dr. Cassidy Cascade is totally out since he died in the Season 2 finale (or so we think, at least), along with almost everyone else who was new to the show this past season.

That leaves most of the remaining cast members, a la, the originals, to return for Scream Queens Season 3, should the series be renewed for another season. But there might be a couple of Season 2 stragglers as well. Speaking of which...

When John Stamos (Dr. Brock Holt) joined Scream Queens, it was shortly after his short-lived FOX series Grandfathered was cancelled, and except for a few random appearances on Netflix's Fuller House, his schedule will likely be free to do another season of Scream Queens, should he be needed again. But honestly, when is a heavy dose of Uncle Jesse not needed?

And So Is Hester

I know that Hester and Brock ran away together to rule Blood Island (that name, though — is this Scooby-Doo?), so they're still very much alive. That means that one or both of them could easily come back to the show if a Season 3 does happen. Sure, Hester is technically a fugitive, but this show has never been great with continuity, and no one ever seems to mind that, so it could work.

There's No Scream Queens Without The Chanels

Unfortunately, Scream Queens probably couldn't go on if the Chanels were to be absent from the show. As awful as they each are in their own ways, they also offer a certain amount of incredulous humor to the show that no one else could really rival. As Emma Roberts plays the lead Chanel, though, and is also an American Horror Story veteran, it would be interesting to see how Ryan Murphy would handle that, should she be asked to star in Season 7 of AHS.

They electrocuted and cryogenically froze her, but even that couldn't stop Denise Hemphill from coming back to be as witty and awesome as ever. At the end of Season 2, she was last seen with the group of survivors and presumably went back to continue her work with the FBI.

Cathy Munsch Made It Out Alive Too

After suffering with what she believed was a life-threatening illness all season long, Cathy Munsch still ended up surviving Season 2 of Scream Queens. And even though her bank account was cleared out by a not very convincing Hester dressed as Munsch, the former dean/former hospital director was able to set up shop as a therapist and rise up once again.

Zayday Is Basically The Final Girl Of The Show

Even though Grace was something of the main character during Season 1 of Scream Queens, it was her BFF Zayday Williams who became the main "Final Girl" during Season 2. And since she also survived and even ended up in a good place in life, chances are, she would be there for a third season to either be tormented again or help the rest of the characters deal with the next Red Devil or Green Meanie in action.

The only extension of Grace that viewers got to see during Season 2 of Scream Queens was her father, who turned out to be one of the many killers who eventually died himself. (Oh, the irony!) But having Grace return for Season 3 would mean that she'd be the perfect suspect to be the next big killer. Or, just a really great red herring.

Unfortunately, since Season 3 of Scream Queens hasn't yet been confirmed by anyone, neither has the cast, so this is all guesswork for now. But for all intents and purposes, these are the returning characters who can and should return if the opportunity arises.