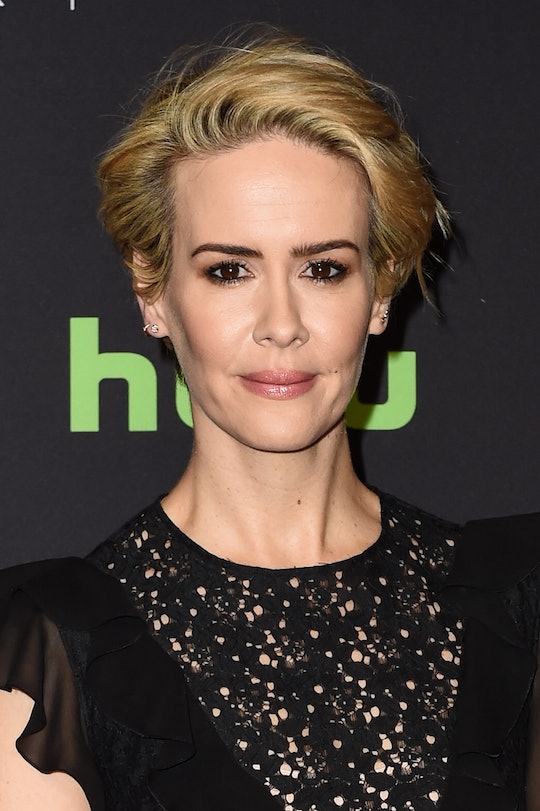 Who Is Sarah Paulson's New 'AHS: Roanoke' Character? The Role Is Full Of Mystery

So far, Season 6 of American Horror Story has been different, to say the least. But with all of the horror elements that fans loved in Season 1 coming back to the forefront, the layout and style was quickly forgiven and even welcomed. Now, however, things are about to change once again as the second half of the season commences, introducing new characters and even switching up the format. But will Sarah Paulson be a different character on AHS: Roanoke now? It's already been confirmed that both Evan Peters and Kathy Bates are going to be taking on different roles, so that would only make sense, right?

As it turns out, Paulson will be playing a new role entirely, starting in Episode 6 and according to Ryan Murphy, even she wasn't made aware of the changes until well into shooting the current season. Still, it kind of makes sense. If the reenactment portion of AHS really is over with, then there's no harm in wanting to continue to get use out of the actors who were playing those roles in the show within the show. Paulson was previously the actor playing Shelby, who as Lily Rabe's counterpart, told her story about the haunted farmhouse she'd purchased with her husband. But now, Paulson will be playing someone else entirely.

Murphy told E! News in an interview that Paulson told him playing a totally different character on the show was one of the most enjoyable things she's gotten to do so far on the series, which obviously just makes us all want more information. But like most aspects of AHS: Roanoke, we're getting these little snippets on a need to know basis and apparently we don't need to know much before the episodes air.

What we do know, though, is that in both Season 1 and Season 5 of AHS, Paulson also played the clairvoyant, Billie Dean Howard. And given the nature of Season 6 of AHS, there is always the possibility that she will once again be brought in as the character to visit the real farmhouse as the camera crew behind My Roanoke Nightmare explores the land on their own.

So far this season, all of the mystery surrounding the story has done a solid job in holding fans' attention and creating a narrative that is both scary and suspicious due to all of the questions that each episode has left behind. So while it's exciting that Paulson will be playing a new character on AHS moving forward, it's not all that surprising that we haven't been given many clues, if at all, as to who this new character might be.

Now that My Roanoke Nightmare is over and the "real" AHS is about to start with Episode 6, we can only assume/hope/pray that whatever character Paulson is taking on will be in it for the long haul. Or, you know, for the remainder of the season anyway.