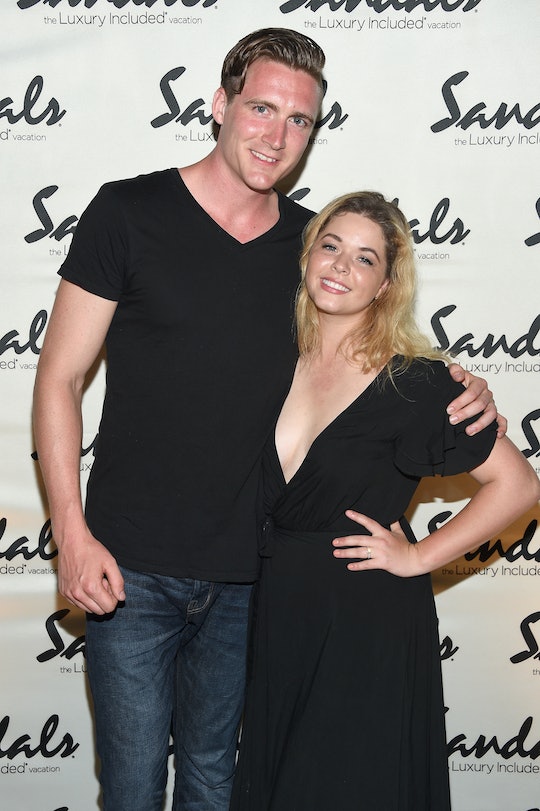 Each season on Dancing With the Stars, a new batch of celebrities is brought in to learn the foxtrot and salsa, but it can also end up testing their romantic relationships with the amount of hours and grueling hard work that competing on DWTS requires. Such is the case with Pretty Little Liars star Sasha Pieterse, who’s been engaged to longtime boyfriend Hudson Sheaffer for almost two years. But who is Sasha Pieterse fiancé Hudson Sheaffer? The PLL star seems to be head over heels in love with her husband-to-be and chances are, fans are going to get to see some of that love and mutual support this season on DWTS.

Judging from both of their Instagram histories, the couple has been together for several years and seem more in love than ever. They might be one of "those" couples who are unafraid to post captions of love and heart eye emojis on social media, but they look adorable doing it, so you kind of have to forgive them. Pieterse played Alison DiLaurentis on PLL for seven years and while it’s unclear if Sheaffer was with her for the entire duration of the series, they’ve been the adorable and inseparable couple fans know today since at least 2014, according to his Instagram.

Unlike Pieterse, Sheaffer isn’t very active in show business, but his IMDB profile does list some stunt work and independent acting roles over the past few years. On both Instagram and Twitter, he calls himself a "creative collaborator," and that seems to be pretty accurate. In addition to the acting and stunt work he’s done, Sheaffer is also into photography and he’s also a part of Comics and Tonics, a yet to be released series (possibly web series) that looks to be centered around both alcoholic drinks and comic book superhero culture, which are two things that most people can get behind. He’s also done mission work in the past, so no one can ever really accuse Sheaffer of not being grounded.

And according to Pieterse herself, Sheaffer is basically the dream fiancé all future brides hope to have. Back in March 2017, she told People that being engaged and planning a wedding is "really surreal, but I’m glad that my fiancé Hudson and I are on the same page. We have the same style, so it makes it really simple, really easy."

And he’s also apparently super laid back about the whole thing, while still being involved. "He’s like, 'This is what’s important to me, and then you can do whatever else you want,' which I respect," the PLL star added. "There’s nothing that he is crazy about — that I love too. We gel together really well."

Aside from sharing the same wedding decor taste and both being artists in a way, Pieterse and her fiancé seem like they’re still in the honeymoon phase of their relationship, several years after becoming a couple, so if you didn’t already love Pieterse from PLL, then you’ll definitely love her now that she and Sheaffer are giving everyone relationship goals.

When Pieterse competes on DWTS this season, it’s going to be a new challenge for the couple, since it will no doubt take up much of her time during the week to not only learn each new routine, but also perform on TV every Monday night. Though something tells me Sheaffer is the kind of guy who would totally show up with roses in one hand and a homemade poster in the other in support of her. Like I said, they’re totally relationship goals and it’s not difficult to see why Pieterse has held onto Sheaffer for so long.