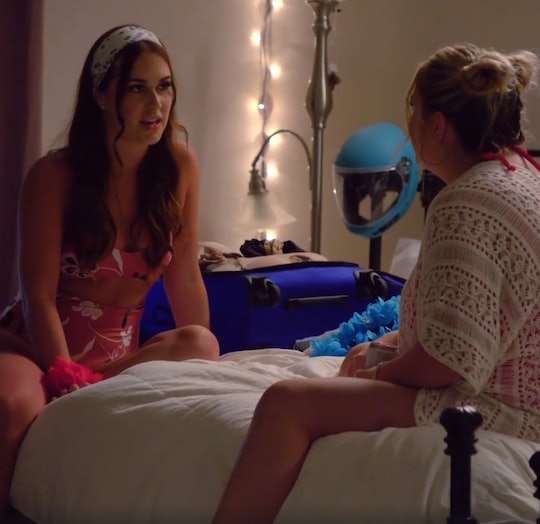 It doesn’t take much to add to the never ending drama on Siesta Key, but while Chloe has been the resident gossip girl on the show, she might get some help when her friend Shelby pays the group a visit on tonight’s episode. She has much of a history with Alex and the gang as anyone else, but when this will be her first official time in front of the camera. I don’t know if Shelby will be on Siesta Key for the rest of the season, but whatever juicy gossip she shares with Chloe has got to be good to get her some screen time.

In a promo for tonight’s episode, Shelby sits down with Chloe to apparently give her the dirt on who Alex had in his bed when Juliette showed up after their latest spat. Juliette came to his house, only to find a mysterious girl in his bed and once again, she ended things with Alex. Now, Shelby might have an idea about what happened and it makes sense because she’s as close to the inner circle as Chloe is herself. Only she’s never really been a part of the Siesta Key cast.

According to Siesta Key, Shelby has known Alex and the rest of the group since high school. And while Juliette hasn't talked much about Shelby, she graduated from Florida State University where Juliette is still enrolled. She definitely has a strong connection to the most of the cast and she could very well know what she’s talking about when she says she knows what Alex was doing with someone else in his bed.

Shelby’s LinkedIn profile says that she worked as an investment analyst at Aether Investment Partners LLC in Colorado up until December 2018. Like Chloe, she probably splits her time between Florida and Colorado. But since her job at the firm ended at the end of last year, she might be ready to spend a little more time in Florida, if only to continue to be a part of Siesta Key.

Right now, Shelby works as a freelance makeup artist and she has a separate Instagram account to show off her work. Since she isn't exactly tied down in Colorado anymore, this could be another indicator that Siesta Key viewers will see more of Shelby in the future. I mean, the last thing Chloe needs is a partner in crime, but there’s no Siesta Key without continuous drama.

Although Shelby did date Alex’s friend Drew for a long time (and thankfully not Alex, as every other eligible bachelorette in town seems to have), she’s currently involved with a guy named Mac Richardson. In a recent Instagram post with him, Shelby wrote, "Every single day I feel more and more blessed that this angel was brought into my life. I love you." It doesn't look like he has any ties to the show himself, but given the Siesta Key revolving door of relationship partners, that’s probably a good thing.

Shelby hasn't been featured on Siesta Key until now, but she has been involved with some of the cast’s social activities in the past. It’s honestly surprising that it has taken this long for Chloe to bring her into the fold, especially since Chloe has become known for bringing around fellow pot stirrers. In an Instagram post from May 2018, you can see that Shelby attended the same Autism Awareness gala thrown by Alex’s family that the rest of the cast went to. At the time, she may have been dating Drew because he is in some photos with her.

Now, Shelby might be the partner in crime that Chloe has been waiting for and since they are already BFFs, Shelby can just slide right in with the rest of the cast.