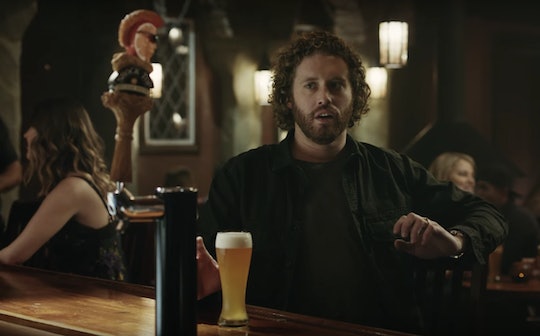 Who Is The Guy In The Shock Top Super Bowl Ad? T.J. Miller Is As Lovable As Always

The Super Bowl's almost here, you're spending your requisite out on YouTube watching the commercials ahead of time, and you've come to the really pretty entertaining one in which a guy trades bro-tastic barbs with a sunglasses-wearing tap handle shaped like an orange slice. So who is the guy in the Shock Top Super Bowl ad? It's none other than actor, voice actor and comedian T.J. Miller, "going shot-for-shot" as the caption on Shock Top's YouTube page puts it, with the brand's mascot, Wedgehead, voiced by comedian Martin Montana.

You may recognize Miller from his role as Erlich in Silicon Valley on HBO (if you haven't watched his Critic's Choice Awards acceptance speech for his role on the show, that's worth another few minutes on the internet today). And you can look for him playing Weasel in Marvel's upcoming Deadpool. Miller also voices Tuffnut Thorston in the How to Train Your Dragon films.

If you're a T.J. Miller fan or just a fan of the faux-insults dudes sometimes trade, this one's for you. Miller plays himself opposite Wedgehead, who accosts Miller as soon as he sits down at the bar. "T.J., over here. Little orange head, flavorful body," Wedgehead says with swagger. Once Miller recovers from being spoken to by a tap handle, he says, "I like your style. Yeah... You look like an unemployed Civil War general." And they're off.

In the banter that ensues, Wedgehead mostly has the upper hand, while Miller plays the role of Sensitive, Defensive Bro. It works.

"You look like you're about to get evicted from your parents' basement," Wedgehead continues.

"Do you realize that your sunglasses move when you talk?" Miller asks, offering a feeble comeback.

"It's kind of my thing," Wedgehead responds, cocky as every. "You look like your pet turtle is the only one you can lean on for emotional support."

But then Miller warms up to the challenge a little more. "Was it difficult to give up your dream of being a punk rocker to manage an electronics store in San Diego?" he asks.

They ultimately end in a truce, of course, and the whole thing makes both Miller and Shock Top appear entirely lovable, which for Shock Top, at least, was the point.

An abbreviated version of what's on YouTube will air tonight, but you can watch the full spot below: