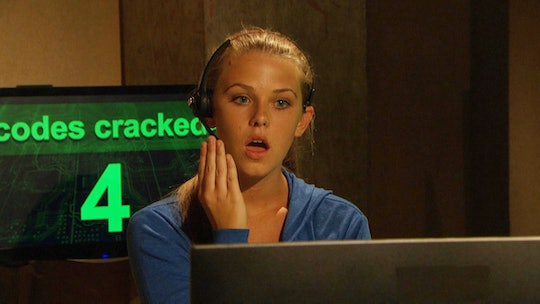 A New Twist Was Unleashed In 'Big Brother,' Shaking Up The House

Although the Big Brother app store is now closed, a new twist has been unleashed on the house. The "Hacker Comp" is a new competition that allows the winner to anonymously replace one of the head of household's nominees with someone else, pick someone to play in the veto competition, and cancel out one houseguest's eviction vote. With all this power up for grabs it's not surprising that people are asking who is the hacker on Big Brother?

Haleigh won the power and for her first big move she took Scottie off the block and replaced him with Tyler, who was not at all happy about touching the block, especially because he has the cloud app, which is meant to protect him from being nominated. Still, though Haleigh should feel proud for taking her shot, it probably won't actually lead to Tyler's eviction. Either he'll win the power of veto himself or someone else will and take him off the block. There are only a select few people in the house that would take Rockstar off instead of Tyler. Instead Faysal would probably save Tyler over Rockstar even though Rockstar's in his alliance.

Thus, Haleigh's shot at Tyler will most likely fail, but you gotta applaud her for doing the one thing no one else has even had the thought to do, even though it's clear to everyone watching from home that Tyler is set to win this game.

As the hacker this week, Haleigh still has a bit more power. She can choose someone to play in the veto comp, and her best bet would be Fessy, since he's already won a few, though if he does win the POV she'll have to take the risk of exposing herself as the hacker to get him to keep noms the same or save Rockstar. And even then, Fessy may not comply. Following that, Haleigh can then cancel out someone's eviction vote, which could tip the scales in her alliance's favor, depending on who's on the block come eviction night. However, if the house is dead set on sending someone out the door, canceling one vote won't change anything.

Angela has made it clear that she wants to back door Bayleigh and she definitely has the votes to do so if she can get Bayleigh on the block. Now that Bayleigh's power app is public knowledge, the houseguests have plenty of reason to want Bayleigh out before she can use it. Level 6 will definitely vote how Angela wants and JC and Sam almost always vote with the house. Scottie is also pretty easy to sway to the other side. So unfortunately, it may end up that Haleigh's time as the hacker will be pointless, other than to make it clear to Tyler he's not as safe as he once thought.

In fact, being the hacker could actually hurt Haleigh's game if she's found out. Thankfully, she's been good about keeping the truth to herself, but if she slips up, she'll become a target just like Bayleigh. Hopefully, Haleigh will learn from Bayleigh's mistake and not even tell her closest allies. Because the fact is, in the Big Brother house, the only person you can really trust is yourself. If Haleigh spills her secret to the wrong person and it gets back to Tyler, she'll have a target directly on her, and though she won the Hacker Comp, it's the only comp Haleigh's won so far. Thus, if she gets nominated she may not be able to save herself.

Hopefully, it doesn't come to that and Haleigh can hold onto this secret until the end of the game, but unfortunately it seems the only people able to keep their mouths shut in this house is Level 6.