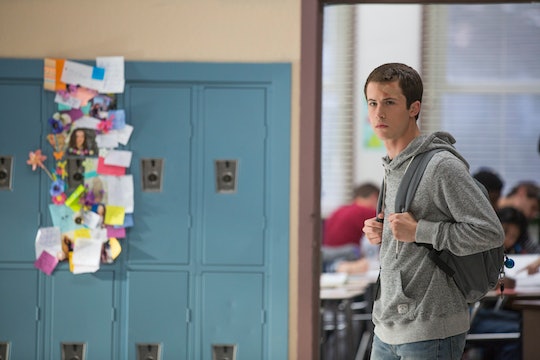 Clay May Look Familiar On '13 Reasons Why'

With TV shows and movies based on books, you can never really go wrong. But when Netflix rolls out its next series, 13 Reasons Why, based on a young adult novel of the same name, there’s going to be a lot more to it. Centered around a teenager’s suicide and the people she left behind who may have contributed to her decision, classmate Clay is left trying to figure out why. But who plays Clay on 13 Reasons Why?

Dylan Minnette has a familiar face, but that’s probably because in the past few years of his career, he’s worked on some pretty big TV shows and movies, never quite stopping. Most people probably know Minnette from his role as President Grant’s son on Scandal, and before that he played Jack’s son on Lost. But at just 20 years old, Minnette already has plenty of big movies and awards under his belt, like Prisoners with Hugh Jackman, which won Minnette a National Board of Review ensemble cast award with the rest of the cast.

He was also nominated in 2015 for a Young Artist Award in the Best Performance in a Feature Film young ensemble cast category for his role in Alexander and the Terrible, Horrible, No Good, Very Bad Day. This was also based on a book. Now, Minnette is going to be leading the mystery on Netflix’s 13 Reasons Why as Clay.

Before starting in on 13 Reasons Why, though, it probably won’t be too hard to find a copy of the book and get a leg up on all of the non-book readers who will be watching the show. In fact, Minnette actually worked with the Books on the subway initiative to hide 100 copies of 13 Reasons Why throughout different New York City subways to help the process along. The new series might be bringing the pages to life, but obviously Minnette recognizes where the show came from.

In 13 Reasons Why, Minnette plays Clay, who is one of the 13 kids Hannah leaves behind. A box of tapes arrives at his doorstep from Hannah. Each one is dedicated to a different person and how that person played a role in her decision to end her life. While Clay, who was both Hannah’s friend and the person who had a crush on her, listens to the tapes, he’s forced to figure out who else contributed to what she was going through when she was alive and what role he played, however unwittingly.

Minnette has been in TV shows and movies that range from supernatural and mysterious to suspenseful and funny, so there’s no doubt that he’ll be able to handle his important role as Clay on 13 Reasons Why. Netflix originals never really fail you though, so when 13 Reasons Why premieres on March 31, it’s easily going to be a must-see, not just because it's so well done, but because it tackles important issues and struggles like bullying and depression, which many teenagers sadly still face to this day.