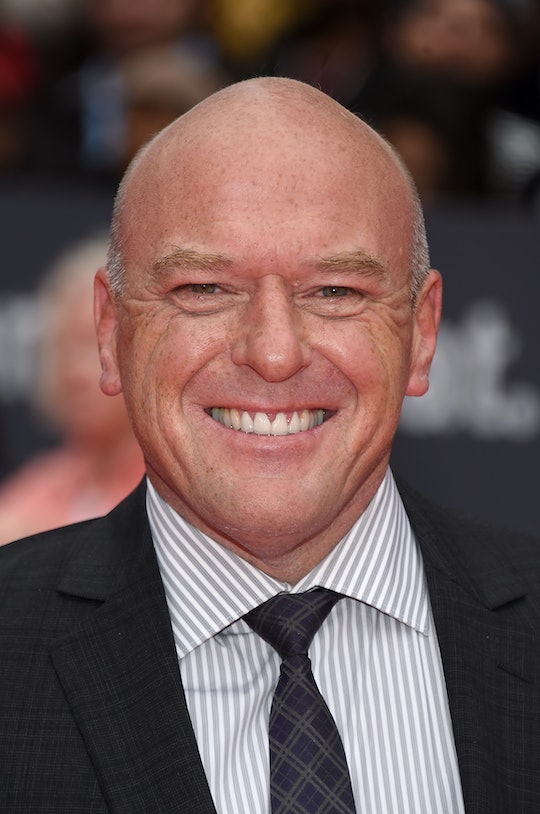 As sad as it’s been to admit, this is the final season of Scandal and before you know it, everyone’s stories will officially be wrapped up, which includes that of Cyrus, who’s had some pretty bad luck over the years. Not that some of it wasn’t warranted, but even so, it looks like he’s still in the running for a happy ending in the form of new character. But since he’s so familiar looking, who plays Fenton Gluckland on Scandal?

Dean Norris is playing a different kind of character than fans may know him for, since he was most notable as Walter White's lovable brother-in-law, Hank Schrader, on AMC’s Breaking Bad. He also became known for playing the villainous Jim Rennie on the CBS series Under the Dome, which was based on the Stephen King novel of the same name. And let's not forget that he had a recurring role on Netflix's Girl Boss and frequently pops up in the long-running CBS comedy The Big Bang Theory, so he’s definitely busy — but not too busy to skip the chance to be a potential love interest for Cyrus on the final season of Scandal.

While Cyrus was at first totally turned away from the idea of dating Fenton on Scandal, with the reason being that the man didn’t live up to the young and fit physical appearances of his former husbands, he seemed to warm up to the idea more during last week's episode "Lost Girls." So Fenton could actually be endgame for Cyrus at this point. But now that the filming is over, Norris has been dipping into other roles and traveling all over the world for them.

In real life, the actor is totally someone you’d want to hang out with on the regular. He founded the Norris Performing Arts Center (N-PAC), along with his wife, with the idea in mind that he could help kids develop the same passion for arts or performing that he had early in his career. The website says that Norris’ goal for the center is to bring to life their "vision to create a world-class integrated dance, theater and acting program, and to bring together some of the highest quality teachers in the Southern California area."

Unsurprisingly, Norris’ talents don’t end with TV though, as he was in 2017’s Charlie Day and Ice Cube-helmed comedy Fist Fight and will be in the upcoming Bruce Willis action crime drama Death Wish. But long before his current stardom, Norris had smaller roles in movies like Terminator 2 and Police Academy 6: Under Siege.

But all of his hard work has paid off tenfold as far as Norris’ career is concerned. He won a Screen Actors Guild Award in 2014 for Outstanding Performance by an Ensemble in a Drama Series for his role on Breaking Bad and the same year was nominated for a Saturn Award for Best Supporting Actor on Television for Under the Dome.

With a wife and five kids (yes, five), Norris is clearly a busy guy, but somehow he seems to juggle it all with ease. Even though Norris made his entrance on Scandal at a time when things are ending for all of the characters, he also might be the character to give Cyrus a happy ending and help him mature in a way he never has before. Which makes him a very important (and memorable) character, indeed.