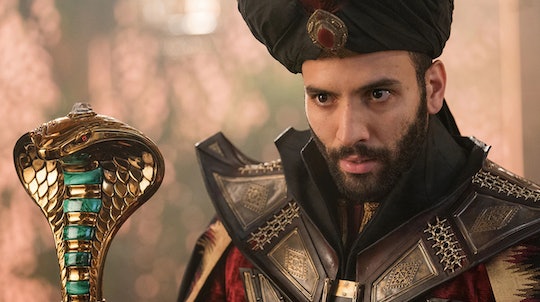 When Disney’s live-action remake of Aladdin hits the big screen on May 24, more people than ever before are going to be paying attention to the villain. That’s because the young actor who plays Jafar in Aladdin, 36-year-old Marwan Kenzari, is a far cry from the spindly old caricature of a villain that we came to know in 1992’s animated version.

In fact, as BuzzFeed News previously reported, upon hearing the casting news, people were so taken with the Dutch actor’s princely good looks that a nickname was bestowed on him — and thus, “Hot Jafar” was born. This all started when Entertainment Weekly released first-look photos from the set in December 2018. Social media quickly locked on to the fact that Agrabah’s worst bad guy was a bit of a treat. As crowdsourcing and Twitter is so good at, somebody dug up a shirtless photo of Kenzari that produced all kinds of reactions, with many hoping that this time the villain comes out on top. Aww, poor Aladdin.

Kenzari won the part after an open casting call was issued worldwide to find actors for the film who both looked the parts and could sing as well as act. According to The Hollywood Reporter, British stars Riz Ahmed and Tom Hardy were also considered for Jafar, but Disney decided they wanted to go with someone not quite so well-known.

The Dutch actor has been working in European productions since 2008, based on his IMDb credits, with occasional roles in Hollywood as well. The U.S.-based films he’s worked on have been good ones though, including Ben-Hur, The Mummy, and Murder on the Orient Express.

Back in 2014,Variety named him to their list of “International Talent To Watch” and The Hollywood Reporter also included him in their “15 International Break Out Talents of 2016.” So while he may be a new face to many Aladdin fans, he's definitely been one to watch for some time now.

Much like Princess Jasmine changes life for Aladdin, there was a girl who was instrumental in shaping Kenzari’s future, too. Kenzari told Variety that he began acting when he was a teen and a girl he was seeing signed both of them up to audition for a production of Chicago. A lot of his work since then has been critically acclaimed, and after this turn in Aladdin, should take it’s place as an iconic part of pop culture, too.

Acting alongside Kenzari as the voice of his sidekick parrot Iago is Alan Tudyk, best known as K-2SO in Rogue One: A Star Wars Story. Opposite him will be Naomi Scott as Princess Jasmine and Mena Massoud as Aladdin. Will Smith takes over from Robin Williams as the big blue genie, and Navid Negahban is Jasmine’s father, the sultan. New roles were created for Nasim Pedrad, playing an aide to Jasmine, and Billy Magnussen who is cast as one of her suitors, according to The Hollywood Reporter.

Check out all of these new and talented stars in live-action remake of Aladdin, which hits theaters today, Friday, May 24.