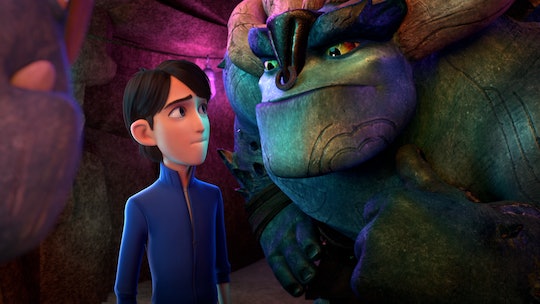 By now, there are enough Netflix shows out there to satisfy pretty much anyone's entertainment palate, but there haven't been many cartoons created for the streaming service. Director Guillermo del Toro's Trollhunters, though, will premiere on Netflix on Dec. 23 and will be one of the first major animated series to come exclusively to Netflix. In it, Jim Lake Jr. finds out that he's a defender of trolls, but who plays Jim Lake Jr. on Trollhunters? Anton Yelchin was chosen for the role and able to record most of his lines before he passed away back in June 2016.

Since his heartbreaking passing, Del Toro refused to replace him as Jim, the lead human character, and since most of his dialogue was already recorded, they were able to fill in little bits and pieces. Although a lot of the voice work was already completed prior to Yelchin's death, that wasn't the main reason for Del Toro keeping him as the voice behind the character. According to Del Toro, who spoke with reporters at New York Comic Con, they listened to 30-50 different voices until they heard from Yelchin and found his voice to be perfect for the role. And although he passed away after a tragic car accident in his own driveway earlier this year, his voice is going to live on in his Trollhunters character.

In recent years, Yelchin experienced a surge of fame thanks to his roles as Chekov in the Star Trek and Star Trek Beyond reboots and voice work in both The Smurfs feature film and The Pirates! Band of Misfits. Before that, Yelchin's work included the lead role in the movie Charlie Bartlett, which co-starred Robert Downey Jr., and Odd Thomas, based on the Dean Koontz horror novel of the same name. And considering that Trollhunters was his final project to work on, it's likely going to be part of his legacy, as it's been promised to be a monumental animated Netflix series.

The rest of the cast includes Kelsey Grammer and Ron Perlman as trolls, and The Walking Dead's Steven Yeun as the bully opposite Jim. According to the synopsis of the series:

When ordinary teenager Jim Lake Jr. stumbles upon a mystical amulet on his way to school one morning, he inadvertently discovers an extraordinary secret civilization of mighty trolls beneath his small town of Arcadia. Strong-willed and seeking adventure but wholly unprepared for the responsibilities thrust upon him, Jim is forced to take on the exalted mantle of Trollhunter, sworn to protect the good trolls from powerful enemies bent on revenge.

Trollhunters premieres on Netflix on Dec. 23 and for the entire first season, Yelchin's voice will be behind the character of Jim Lake Jr. So even though he may be gone, he won't soon be forgotten.