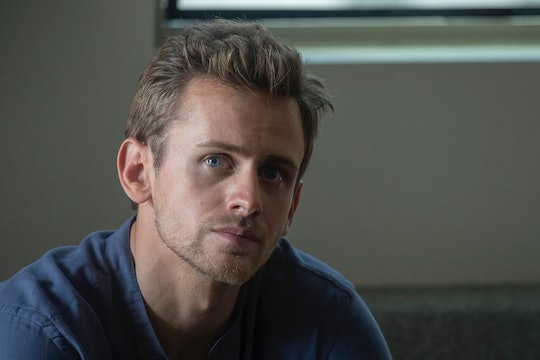 When a group of newbies was introduced in the This Is Us Season 4 premiere, one who stood out was the Kevin (Justin Hartley) lookalike who turned out to be the adult version of Kate (Chrissy Metz) and Toby’s (Chris Sullivan) son, Jack. The jury is still out on whether or not he will live up to his grandpa’s reputation, but he already has a lot going for him. And fans are curious about the actor who plays Kate’s son on This Is Us, because he definitely wowed viewers in every scene he appeared in during the premiere.

Blake Stadnik is easily the standout new addition to the This Is Us cast as Jack Damon, who is an adult version of Kate’s son and who is blind, except for being able to see some shapes and bright lights. In real life, Stadnik is also visually impaired and, according to his IMDb profile, This Is Us is his first big TV role. You wouldn't know it, judging by the way he plays an adult Baby Jack, who starts off a little tortured, but is slowly inspired by his new love interest to gain fame as a singer the way his mom and grandma never quite could.

Stadnik’s character brings things full circle, in a way, and after seeing the way Stadnik tackles the role so far, I don't think anyone else could have done so well.

Stadnik’s Instagram bio says he is an advocate for disabled artists and he recently posted a photo with This Is Us creator Dan Fogelman and executive producer Ken Olin thanking them for taking a chance on him as a relatively unknown actor. Under the photo, he wrote, "They also know how important it is to tell stories using proper representation. When I was young, it would have been so special to see some on television with whom I could relate telling a story like Jack’s."

His Instagram bio also says he is a Jedi in training and a Dungeons and Dragons dungeon master, so it’s hard not to love grownup Jack and the real life actor who plays him. And although This Is Us is his first big role in television, before he was cast in Season 4, Stadnik already knew his way around a stage thanks to his theater experience. He was in Newsies on Broadway and was part of the 42nd Street national tour. Over the summer, he was also in Guys & Dolls, so just because Stadnik is on This Is Us now, it doesn't mean he has forgotten his roots.

His roots might actually be why he was chosen for the role. Fogelman told TVLine that producers wanted to find someone who can sing and act, but could do the latter dramatically or comedically, as needed. Stadnik’s background in theater worked in his favor.

"We wanted to find an actor who could be a leading man and very handsome and very funny and look great with his bare ass on national television, but also be able to go stand in The Greek in front of a live audience and actually perform a song," Fogelman said. "So there were a lot of boxes to check."

He added that Stadnik’s talent as an actor and singer blew everyone away. If the plan is to keep up with the future adult children of the Big Three, then I can definitely see Stadnik sticking around. Right now, his Instagram is a testament to his role on This Is Us and it's clear that he loves playing the role almost as much as fans are loving getting to know Kate and Toby’s son in the future.