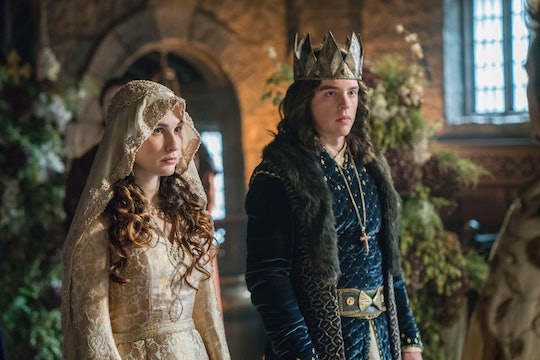 Princess Elsewith On 'Vikings' Is Played By A Talented Young Actress

Vikings fans may have just been introduced to Princess Elsewith for the first time, but already she seems like an important player in the rest of the season. She was originally betrothed to Kind Alfred, but somehow she and Bjorn have made a connection instead and you know that's not going to go down well with literally anyone. As one of the new Season 5 characters though, you're probably going to be wondering: who plays Princess Elsewith on Vikings? Róisín Murphy has been in a few other shows before she was cast in Vikings, but this might be her biggest TV role yet.

Before Vikings, Murphy had a recurring role in the thriller 100 Code and in 2006, she was in The Clinic. Besides a few other small roles, Murphy's attention had been focused on learning her craft. She's also active in the theater and posted a photo on Instagram of a playbook and her rigorous note-taking skills ahead of a production. She also trained for seven years at the The Gaiety School of Acting in Dublin and has already been recognized for her work.

Murphy was nominated for an Irish Film and Television Award for her role in the 2012 movie What Richard Did and as that was much earlier in her career than when Vikings came along, she has a ton of promise as a talented young actress.

Although she's from Dublin and likely still lives there to be close for Vikings filming locations, Murphy's Instagram has a lot of recent photos from Los Angeles. That could mean there are other big roles in Murphy's future. Though for now I think it's safe to say she has a solid home on Vikings. Of course it's hard to say if Princess Elsewith will survive unless she toughens up a bit, but hopefully she's in this for at least the remainder of the season.

Murphy's Instagram also shows how seriously she takes certain human rights issues, like campaigning for a bill in support of pro choice for women in Dublin. Under one of her pictures from voting back in May, she wrote, "Finally the day has come. It has been a privilege to work alongside the hugely dedicated people from DBN Together For Yes. We made history today. Thank you to all of the beautiful YES voters. It's official — we have a choice." She also named The Handmaid's Tale as one of her essential holiday reading books in 2017. I'm pretty sure I wouldn't mind knowing her in real life, so I'll just put that out there.

I'm not sure if Murphy is currently seeing anyone, but there are a couple of posts about a guy she referred to as her "lovely spicy boy," so it's possible. They could just be friends, though...

She might not have time for romance with what must be a packed filming schedule. She's definitely worked hard to get to where she is today. Back in 2013, Murphy told The Irish Film & Television Network that she'd been accepted into the Lee Strasberg Theatre and Film Institute in New York and before that, she'd spent a good part of her childhood studying at The Gaiety School. She's been training to be an actress for most of her life and with her role on Vikings, it's continuing to pay off.

She also said at the time that although she admired Leonardo DiCaprio as an actor, she draws inspiration from her sister and mother too. "They are both actresses and watching their bravery and intensity over the years has definitely been encouraging," she said. Murphy might be a new face for some Vikings fans, but she seems to have what it takes to keep her career going on its upward path.