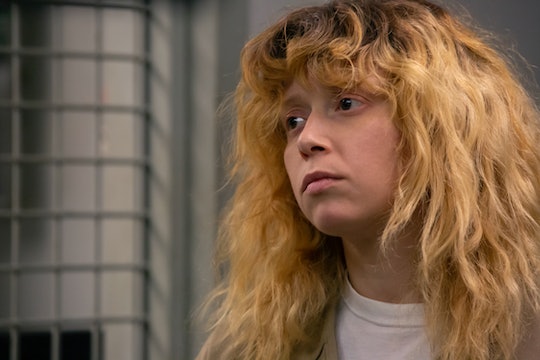 The final season of Orange Is the New Black is bittersweet. It marks the end of a game-changing show that helped put Netflix on the map. But it also means seeing how the stories of the characters everyone fell in love with over the past seven seasons turn out, including Nicky. She hasn't had it as rough as some of the other inmates, but she deserves some happiness and this season she got it in the form of a new girlfriend. Surprisingly, however, Marie-Lou Nahhas, the actress who plays Shani on OITNB, is new to the business and this is one of her biggest TV roles to date.

According to IMDB, Nahhas had an uncredited role in the 2015 movie Southpaw and then appeared in the comedy Craig Quits His Day Job. More recently, she was in an episode of the miniseries The Looming Tower and the CBS drama Madam Secretary. Judging by her role in OITNB, Nahhas was more than ready to take on a larger part and she has already proven that she can act with the best of them.

Nahhas hasn't risen to the ranks of her OITNB co-stars just yet, but there’s a good chance you might be seeing her face more after Season 7.

Still, acting wasn’t Nahhas’ top career choice. Before she broke out into show business, she went to the University of Pittsburgh, where she studied biology and biological sciences. She then received her Master’s of Science in healthcare management from Duquesne University in 2015. From there, she took on acting as what looked like more of a side gig than anything else.

While Nahhas hasn't taken on any other big roles besides that of Shani, Nicky’s girlfriend on OITNB, using her potential platform as an actress might be just what she needs to talk about other more important things in her life. Her LinkedIn profile lists her profession as healthcare advocacy and says that Nahhas has been a speaker for the Pittsburgh Aids Task Force for almost six years. It’s possible that she just had a change of heart in her career choice after earning her degrees, but Nahhas has the opportunity to use both interests to make a difference.

Although Nahhas plays a woman from Egypt who came to the U.S. illegally on OITNB, in real life, she is from Lebanon and moved to the U.S. more than 10 years ago. Although she is now based in New York City, Nahhas posts Instagram photos and videos of her travels back to Lebanon and to other parts of the world. She also seems to be close to her family, though it looks like she isn’t seeing anyone romantically right now.

Nahhas is also no stranger to a good selfie and her captions are often full of totally zen anecdotes like, "Touching a sensation through memory is a powerful form of emotional intelligence that can make us revisit the original sensation with a mature state of familiarity."

Judging by her IMDb profile, it’s unclear what Nahhas will appear in next or how long her character will be on OITNB this season. Some of the Season 7 plots revolve heavily around an ICE detention center and her character is one of the detainees who just so happens to find happiness with Nicky. Her character could just be a plot device used to finally throw Nicky and Lorna together after several seasons of Nicky pining after her prison bestie. Either way, Nahhas definitely brings something fresh to the cast and she has the potential to move up from here.