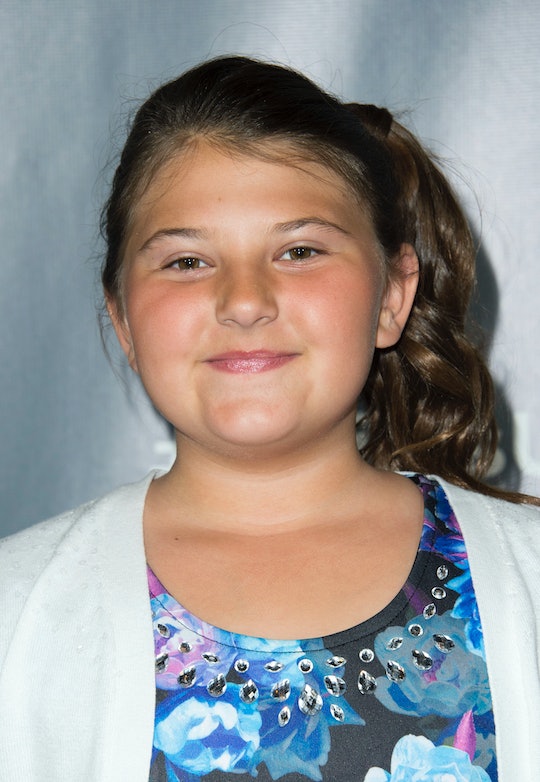 Young Kate From 'This Is Us' Is Loving Her Newfound Stardom

So far on This Is Us, all three of the Pearson kids have been dealing with their own separate issues. Young Kevin has insecurities, while the younger version of Randall deals with trying to find his place in his family and young Kate struggles with body image issues, no thanks to mean girls at school. They’ve all managed to tug at fans’ heartstrings a lot, but in real life, who plays young Kate on This Is Us?

Mackenzie Hancsicsak, at just 10 years old, is easily one of the breakout stars of This Is Us. Not to mention, this is actually her first and only acting role, so it’s even more impressive how much emotion she manages to put in her role as young Kate and how she’s helped the character to grow since the series premiere.

Hancsicsak may not have the emotional baggage that her character has had face (especially on a show filled with so much heartache), but the young star seems like she’s just as sweet as her TV counterpart and totally humbled by the legit fame that This Is Us has brought her. In fact, her most recent Instagram post is a photo of her first This Is Us fan letter ever and she added in the caption: "I'm so excited! I make my mom stop at the post office every day to check the PO Box. I'm so honored and thrilled to receive this." Could she get any more adorable?

In June, Hancsicsak spoke to Yahoo TV about her favorite scene from Season 1 of This Is Us and cited it as the pool scene in Episode 4 with TV dad Milo Ventimiglia that no doubt had viewers in full ugly cry face as he consoled her after she was body shamed by girls at the city pool who she thought to be her friends. "[Ventimiglia] practiced the scene with me a thousand times," she said. "He helped me try different ways to do the scene. He made me feel not afraid of doing it." And since Season 2 of This Is Us is sure to have more clues about how Jack died, Hancsicsak added a thoughtful, "I hope that he dies as well as he lived."

Outside of her This Is Us life, which has given the young actress a new set of on-screen parents to look up to as well as the adult version of her character, Chrissy Metz, it seems like her actual parents try to give her the most normal life possible. You know, outside of an Emmy Award-winning hit TV show. When she finds the time, she’s a Girl Scout and she still goes to school, as opposed to homeschooling. And yes, like all of the suburban families of the world, her parents participate in things like "Donuts for Dads" and "Muffins for Moms" days that no doubt help Hancsicsak feel like a normal kid when the cameras aren’t rolling.

Playing young Kate on This Is Us has no doubt been a wild ride for Hancsicsak, who’d been interested in theater for years and attended tons of productions with her mom, but had also been on only a couple of auditions total before auditioning for her role on This Is Us.

"I probably had been to two auditions before I went for This Is Us," she told Élite Magazine. "They asked me to try lines with different emotions: happier, angrier, faster, slower. And I was in there a long time." Hancsicsak’s mom added that the directors wanted an actress who would come across as more natural than professionally trained, so Hancsicsak’s lack of experience actually worked in her favor.

Because she has the most screen time with her TV brothers Lonnie Chavis (Randall) and Parker Bates (Kevin), Hancsicsak has managed to form real bonds with them and, as she told the New York Post, since they met at their callback auditions for This Is Us, they had a special bond from the start.

"When we filmed the pool episode down in Long Beach, Parker, Lonnie and I went to this really cool ice cream place called Afters and got a donut filled with ice cream and then rolled in Captain Crunch," Hancsicsak revealed, like any 10-year-old would. "And one time Parker and his brother Prestyn and I met at the Sherman Oaks ArcLight and saw the movie Trolls and then had dinner at the Cheesecake Factory. I love hanging out with my 'brothers.' I miss them when I’m not on set."

Since This Is Us is already such a hit TV show with a unique premise that’s still likely drawing new fans in, I don’t think the kids of the series have to worry about being split apart anytime soon, but it’s also refreshing to see how down to earth and grounded Hancsicsak is despite her newfound fame. Can't wait to see her back in action as Kate in Season 2.