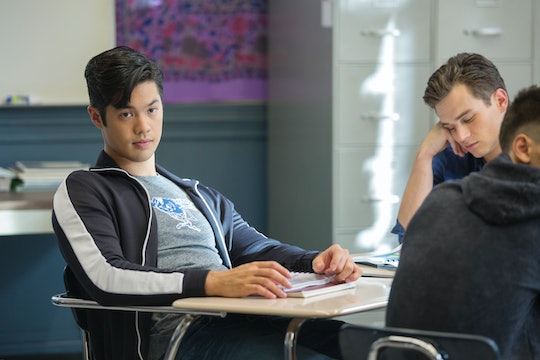 Zach From '13 Reasons Why' Has Played A Jock Before

The newest TV adaptation of a young adult novel is here and whether or not that’s your thing, it's hard not to be curious about 13 Reasons Why. Among the core cast of teenagers — whose lives are touched by one girl’s tragic suicide — is Zach, a clearly popular kid who probably didn’t realize what part he played in it all. So who plays Zach on 13 Reasons Why? Ross Butler isn't really a newbie to the acting game, but the past year of his career has been pretty big for him.

13 Reasons Why isn’t your run-of-the-mill, dystopian society, young adult novel-turned-small-screen-adaptation though, so you can thank the Netflix gods for that. Instead, it’s a mystery series centered around Hannah, who committed suicide and left behind 13 tapes to be listened to by each of the 13 people who, in some way, contributed to her decision to end her life, whether they realized it or not. As one of the 13 high schoolers meant to listen to the tapes and pass them along to the next, Zach plays as integral a role as any in the series and the part itself is just another big one to add to Butler’s roster of projects this year.

Butler has been working in TV for the past five or so years, but in recent years he’s become something of a fixture for the preteen and now, teenage crowd. But also for millennials like me who will weirdly never stop enjoying teen dramas and mysteries. Fans might know Butler from Teen Beach Movie 2, the Disney Channel musical, or MTV’s Teen Wolf, which he worked on for a multi-episode arc. But recently, he was cast as Reggie in the Archie adaptation of Riverdale on The CW. Clearly, the actor has been pretty busy, but that’s just because, at 26, he’s pretty talented and can play a convincing teenager, which is why he makes a great Zach on 13 Reasons Why.

Aside from acting though, apparently Butler is a musician. At least, when it comes to posting piano videos on his Instagram, it would seem that way. I once started to learn to play the piano, but when it came time to start using two hands, I bailed, so in my eyes, Butler is definitely musically inclined. In an interview with Buzzfeed back in 2015, Butler admitted that at the time, the wallpaper on his phone was of a piano but he wasn’t super obsessed. “It came with one of the phone themes,” he admitted. “I can play piano, but I’m not that passionate about playing that I made it my background on my own volition.”

In the same interview, Butler recommended that if people haven't already, they should definitely watch Game of Thrones, so he already has several cool points in the bag. As far as movie roles are concerned, Butler seems plenty busy with his TV deals right now, but that doesn’t mean he doesn’t have excellent taste in the classics, which just makes you love him even more. He might play the jock more than he’d like to, but in real life his interests are much more diverse.

Riverdale was recently renewed for a second season and 13 Reasons Why premieres on Netflix on March 31, so it looks like Butler will definitely be keeping busy for some time.