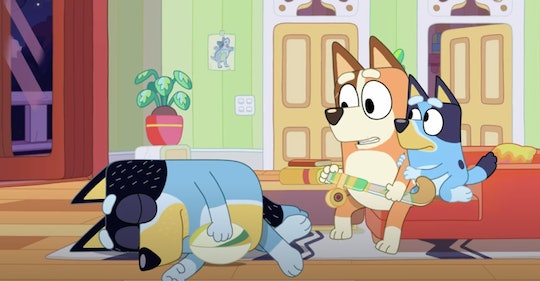 The Australian animated hit Bluey is bound to take over your kids' TV time — if it hasn't already. Combine cute puppies playing endless games with their lovable parents and you're bound to have a hit on your hands. Taking inspiration from their own families, the creators brought to life a family that will feel like home. For instance, the voices behind Bluey's parents Bandit and Chilli are one part of what makes the magic happen. Here's who they are in real life.

Bluey, which airs on the Disney Channel in the United States, centers around kids engaging in imaginative play with the help of their parents. The show's creator Joe Brumm told The New Daily that his "focus was socio-dramatic play" to "[find] out why the kids play in this way, what they are getting from it and what happens if it’s missing or truncated was a good centre point to learn some of the basic psychology of it." But ultimately, the purpose of the show was to keep kids laughing and learning. As Brumm told The New Daily, "If Bluey does have a point outside of making kids laugh, it’s to show us parents what kids learn while they play in this way."

The parents, Bandit and Chilli, are a central part of why the play comes to life. They are voiced by '90s indie rockstar David McCormack of Australian band Custard and actress Melanie Zanetti, who has appeared in Tidelands, The Bureau of Magical Things, and The Family Law. Despite the show's natural flow, the two have never met in person, according to The Guardian. As McCormack explained to the publication, the two get sent their scripts and read them remotely; it isn't until the episodes are put together that they even know what the back and forth sounds like.

"They send me the script, they highlight my lines, and I just read my lines. I don’t have to act, I don’t have to change my voice or anything. I don’t hear anybody else talking; all I do is literally read what they tell me to and that’s it. And they do all the animation and all the other voices and the music," he explained to The Guardian.

In an interview with Australia's News Breakfast on ABC TV, Zanetti gushed about why she loves her character Chilli. "I think she's warm and funny and smart. And such a good mum and wonderful at interacting with her children. But she also has a life, a job outside her family life, she plays hockey. So she's a really well-rounded person/dog," she told News Breakfast in March. "And I also love her relationship with her husband. I think they're such a great couple and it's really a parent couple goals."

For these reasons and more, your family is sure to love Bluey as much as the actors do. Season 1 of Bluey is available to stream on Disney+ and Season 2 began airing on the Disney Channel on July 10.

More Like This
'The Proud Family: Louder & Prouder' Is Returning For Season 2 On Disney+
All The Nights Hocus Pocus Airs On TV In October 2022
'Yellowstone' Has An Exciting New Cast Member For Season 5
Scott Calvin Is Ready To Retire In The Santa Clauses Series Coming To Disney+