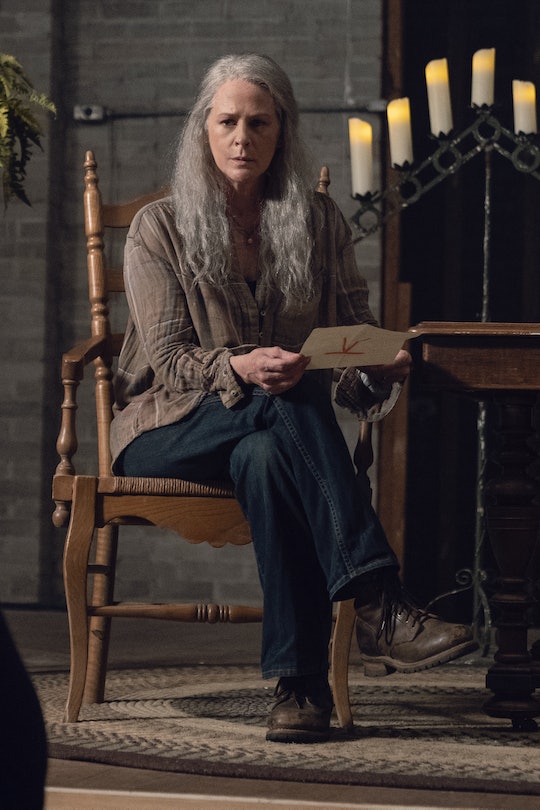 The Walking Dead Season 1 seems like a lifetime ago, but that’s probably because for some of the younger characters on the show, it was. Since then, almost eight years have gone by and in that time, a lot has changed. Judith is now a smart-ass kid, Carl is dead, Rick is permanently M.I.A., and Carol, who lost her family in the apocalypse, now has a new one. But who was Carol’s first husband on The Walking Dead? Ezekiel might not be the first man she’s been with since the end of the world began, but he is the first husband she has had since her Season 1 husband died.

Longtime fans probably remember Carol’s abusive and downright cruel husband, Ed, from Season 1, when Rick first found Lori, Carol, and the other survivors. Carol and Ed had a daughter, Sophia, who would later turn up missing and be seen again as a walker. Ed himself never showed any kindness toward Carol or Sophia and was shown being abusive to Carol, who was once a shell of the strong leader she is on The Walking Dead today.

Ed died in Episode 4, 'Vatos,' when a swarm of walkers crawled into his tend and attacked him. Later, Carol finally took took out a lifetime of frustrations on him by driving an ax into his head repeatedly so he couldn’t reanimate as a walker. It was definitely a turning point for Carol and until she started up with Ezekiel, she was never that serious with any other man on The Walking Dead.

There was a short period of time where Carol and Daryl got closer and seemed like something romantic might spark between them. And before Tobin died in the Season 8 episode 'Do Not Send Us Astray,' he and Carol dated.

At the beginning of Season 9, Ezekiel proposed to Carol, cementing their relationship. When things picked up in Season 9 after the latest time jump, she had a wedding band on and she’s clearly been living with Ezekiel and with Henry as their adopted son, in a way. It's a far cry from the life Carol had at the start of the series, but like I said, that was basically an entire lifetime ago.

Luckily, Carol’s first husband on The Walking Dead won't be coming back into the picture anytime soon as a human or a walker. And although Carol initially turned down Ezekiel’s proposal, they seem to be going strong. The Walking Dead showrunner Angela Kang has high hopes for their relationship moving forward, despite Carol and Daryl shippers being a little disappointed that that relationship might never come to fruition.

"[Ezekiel] loves people for who they are. He has no interest in changing Carol into a version of himself. He likes the fact that she’s a little spiky and cranky, and doesn’t like ridiculousness," Kang told Indiewire. "We just thought that it would be fun to explore what does it mean for Carol, who has been in such turmoil over the years, to find this spot of happiness within an unexpected place."

So I guess you could say they found love in a hopeless place?

Melissa McBride, who plays Carol, told Indiewire that although she can see where fans are coming from in their hope for Daryl and Carol, she hopes they can appreciate the characters' friendship. Over the years, Carol and Daryl have developed one of the stronger friendships out of the survivors and it would almost be wrong to turn that into something else.