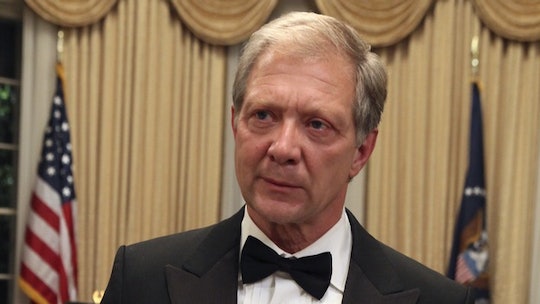 Cyrus' VP Pick Could Get Interesting On 'Scandal'

He hasn't yet been sworn into office yet, but with Cyrus about to be the official new President of the United States in the Scandal universe, who will be Cyrus' vice president on Scandal? He was originally going to be Frankie Vargas' vice president, but with the would-be president assassinated and Fitz set to announce Cyrus as the new POTUS, Cyrus has a decision to make about who his right hand man will be now. Honestly, having Vargas as the president was the safe bet to keep things running relatively normally. Because in the end, Vargas did seem like a genuinely nice guy. But having Cyrus slip into the role was totally unexpected. Likewise, it's hard to think about who will be Cyrus' vice president on Scandal now.

The most logical choice for Cyrus' vice president would be Jake, giving him a useful place in the series still and keeping Olivia close to the White House. Granted, she hasn't really been with Jake for a while and they haven't really seemed on the best of terms lately, but Olivia needs to have a direct link to the White House and Jake would afford her that. Then again, he is the one who killed Cyrus' husband back in the day, but in the name of politics, Cyrus might be having his strings pulled by someone else, including Command himself.

The other option for Cyrus' vice president is Mellie, giving her some purpose to stay on in the forefront of the show, though, it's hard to imagine her taking orders from any man, let alone Cyrus. There is still the off chance that the Electoral College might vote for someone else to be put into power in Cyrus' place, but if he really was behind the death of Vargas, then he probably put all of his ducks in a row beforehand, meaning that nothing will get in his way now.

Jake was originally supposed to be running with Vargas, but when he became available, Olivia made sure he was running with Mellie instead. Could this be a way for him to ensure his place in the White House, by working with Cyrus despite their differences, in order to benefit them both? Honestly, right now it's hard to tell if Cyrus is the one to blame, even if someone on Vargas' team called the FBI tip line stating that to be the case. But if Cyrus does officially get sworn in as president on Scandal, then he's going to have to pick an acceptable vice president, and soon.