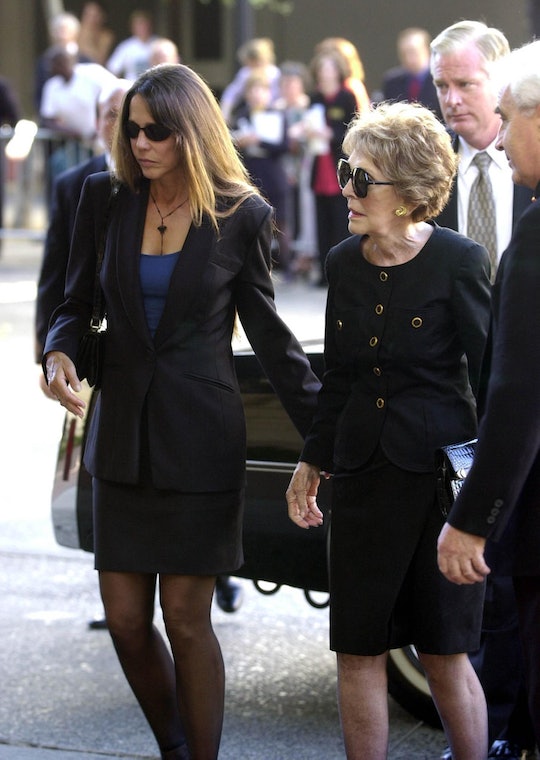 Who Will Give Nancy Reagan's Eulogy? Her Daughter Patti Davis Has Made Peace With Her Mom

Saying goodbye to anyone is difficult. But saying goodbye to a parent is especially tough. So when I heard just who would be giving Nancy Reagan's eulogy and found out it would be her daughter, Patti Davis, it was quite the surprise. And it was doubly surprising given their somewhat rocky history.

Patti Davis, daughter of former President Ronald Reagan, who died in 2004, and former First Lady Nancy Reagan, had a tumultuous (and somewhat notorious) relationship with her parents. But since her mother's death from congestive heart failure on Sunday at age 94, Davis felt she had come to a sort of peace with her mother. In an exclusive interview with Marian Shriver on the Today show, Davis expressed that she and her mother were closer before her death.

At some point, and it really was at the beginning of my father’s illness, I made a choice. I chose to aim for peace of mind and peace in and of itself with my mother. And past recriminations, anger, blame, all of our sort of strained history together, there’s no peace of mind in that at all, and I really made a decision to look at her and look at us through a different lens — through a more loving, forgiving lens.

Davis, a writer and actress, gained notereity for being publicly critical of both her parents. Her 1986 book Home Front was considered by many to be a thinly-veiled attack against the Reagans. It was the story of a lonely young woman whose TV star father, much to her dismay, becomes President. She went on to write her memoir in 1992, The Way I See It, where she described her mother as a pill-popping, abusive, distant woman. At the time the Reagans refused comment on Davis' version of their story, as did the other Reagan children. In the book, Davis admits she was something of a "wild child." She dated rock stars, ditched her Secret Service detail, and struggled with substance abuse.

Despite their difficult past, Davis seemed to be contemplative since her mother's death. And one thing everyone close to the Reagan family seems able to agree on these days, though, is how deeply the former president and his first lady loved each other.

Davis agreed. In a poignant piece she wrote for TIME magazine, she shared how her mother grieved after the death of her father.

I remember how she and my father used to walk along the paths of the garden in the afternoons–both of them older, their steps slow and cautious, his occasional questions splintery with Alzheimer’s, her answers patient and soft. She stopped walking in the garden after his death; I didn’t need to ask why. I remember her weeping on my shoulder a week before he died and saying, 'Nothing will ever be the same without him.' And the way she broke down when we had to leave his coffin after flying with it back and forth across the country, through several days of services. 'I can’t leave him,' she wept.

It seems Davis has been eulogizing her mother, the inimitable Nancy Reagan, for much of her life. And while it is always tragic to have felt such strife, such enmity, such pain, there seems to be a sweetness, too, in finally making peace — in forgiveness. Davis' eulogy at her mother's funeral Friday will no doubt be beautiful.