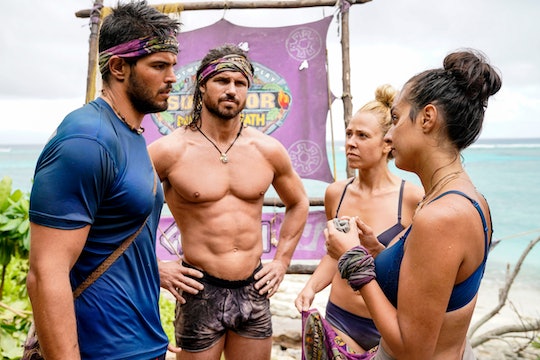 This season of Survivor is all about the underdogs versus the alphas. And while its it's easy to root for the underdogs in general, you also can't help but admire some of the contestants in the Goliath tribe. So who wins Survivor Season 37? Right now, it's anyone's game, but the Goliaths were off to a strong start right from the premiere episode. They were given the responsibility if choosing two of their strongest competitors to go up against two of the David tribe’s weakest and, as to be expected, the Goliaths won the first big competition of the season. The Davids were also the first tribe to lose one of their own to an elimination, so the Goliaths had an almost immediate advantage.

To be fair, Jeremy Crawford from the Goliath tribe was the second castaway who was voted out, so its it's not like the Davids don't have their own strengths when it comes to outwitting the competition. But it could be a close one this season. At the start, the castaways were split into two separate tribes based on who the Survivor producers presumed them to be.

But just because a David may not seem as strong as a Goliath, it doesn't mean that he or she can't come out of this as a winner. Likewise, it's entirely possible that a Goliath may not be as strong or confident as the rest of their tribe. Ahead of the season, there were already some strong potential Survivor Season 37 winners.

Davie Rickenbacker who is, coincidentally, in the David tribe, revealed in his Survivor bio that he’s a Siberian husky breeder and because of that, he understands "how packs work." He’s also skilled in fishing and general carpentry, making him a valuable player on the David tribe. Before the season, he said in his bio that he planned to be sociable to everyone within his tribe but to assert himself when needed. These are the kinds of Survivor skills that could take him far as long as he isn't targeted by the Goliaths too soon.

Bi Nguyen from the David tribe also has a good chance at winning the season — or at least making it pretty far. According to her Survivor bio, she lived in rural Vietnam until she was nine years old and while she’s an MMA fighter now, she previously sold cars, so she knows how to talk to people and tell them what they want or need to hear. I definitely wouldn't count her out just yet.

Natalie Cole of the Goliaths has already proven herself to be strategic and competitive enough to potentially win Survivor Season 37. Natalie is a publishing CEO in real life who calls herself a "risk taker" in her Survivor bio. She already has the confidence to win over some of her fellow tribe members, so she could definitely have what it takes to make it to the end.

Dan Rengering is another member of the Goliath tribe who could win. He’s a S.W.A.T. officer in real life and has the physical and social skills necessary for this kind of long-range competition. Sometimes an overabundance of confidence can be a deterrent, but in his case, it could be part of what takes him to the final tribal council.

Because of the competitive nature of some of the stronger players on both sides, right now anyone could come out on top at the end of the season. There’s still plenty of time for some Davids to rise up above the Goliaths or some Goliaths to realize that they’d rather secretly align with members of the David tribe. And I, for one, am ready for some inner tribe backstabbing.