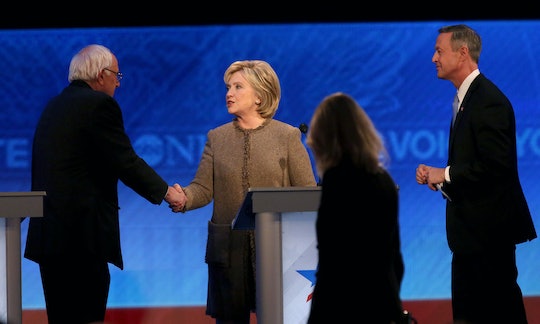 Who Won ABC's Democratic Debate? It Was A Close Race But One Candidate Edged The Others Out

Well, that’s it. We’ve survived the last Democratic presidential debate of 2015. The three contenders for the party’s nomination — Hillary Clinton, Bernie Sanders, and Martin O’Malley — faced each other in the first and only debate held in the primary state of New Hampshire. And really, it’s pretty clear Hillary Clinton won the ABC Democratic debate. She deftly rose above the recent data breach controversy and proved herself pretty much unflappable in a night filled with sparring between the candidates over policy matters. In the process, she even managed a smooth entrance that fueled a mini-viral moment.

Prior to Saturday night's festivities, the third Democratic debate was expected to be pretty tame. The expectation was that the debate would center on national security and foreign policy, in light of the recent terror attacks in San Bernardino and Paris. Going into the debate knowing this, the night's topics definitely favored Sanders and Clinton, as Clinton's served as Secretary of State, and both Clinton and Sanders have extensive Senate voting records on those issues. O’Malley, on the other hand with his background in Maryland politics, had a tougher hill to climb.

But on a night that could have been overshadowed by the Clinton data breach (and Bernie Sanders' on-stage apology), the Democratic frontrunner managed to keep the focus on the economy, foreign policy, and the need to move beyond the harmful rhetoric coming from the GOP candidates. As ever, Clinton was calm, cool, and collected under pressure, adhering to the rules set forth by the debate's moderators, and swiftly staying above squabbling with the other two candidates.

Heading into the debate, Sanders had a two-point lead in recent NH polls, even though Clinton had won endorsements from more of the state's major players. ABC News reported on Saturday that Governor Margaret Hassan announced she'd be supporting Clinton, joining Senator Jeanne Shaheen and more than half of the Granite State's Democratic caucus. So far, Sanders has claimed support from the local New Hampshire chapter of the Service Employees International Union, the International Brotherhood of Electrical Workers — and 48 percent of polled Democrats, according to Real Clear Politics. But small-scale support, while valuable, won't be enough to offset Clinton.

The question of the night quickly became whether Clinton would confront Sanders over the data breach and defend the actions taken by the DNC to block the Vermont senator’s access to voter records. And Clinton did respond, but with grace and command:

... Now that I think we've resolved your data and we've agreed to an independent inquiry, we should move on because I don't think the American people are all that interested in this. I think they are more interested in what we have to say about all the big issues facing us.

From there, Clinton went on to defend her record against O'Malley's new, more aggressive debate strategy and spar with Sanders over everything from ISIS to Wall Street Reform.

Not to mention, Clinton had the best viral moment of the night, when she arrived on stage just slightly after the other candidates — and after the commercial break. Her stroll back to the podium was the definition of unbothered and led to an instant "Where's Hillary" moment that took over Twitter for a few minutes.

Honestly, following any debate, people will weigh in with differing opinions about who came out on top. It all depends on what metric is used for comparison. We’ve seen underdog candidates become debate winners because they show top-notch debate skills, deftly turn questions into message opportunities, or skewer their rivals with an unexpected command of the facts. The frontrunner is usually considered the winner by default, especially if they manage to end the evening without making any gaffes or missteps.

But when it comes to tonight’s debate, it’s clear that Hillary Clinton exited the stage in the strongest position. In a night that should have been of little consequence in the polls, Clinton managed to survive a bevvy of attacks from her rivals and deliver several solid attacks of her own.

It was a narrow win, but still a win for the Clinton camp.