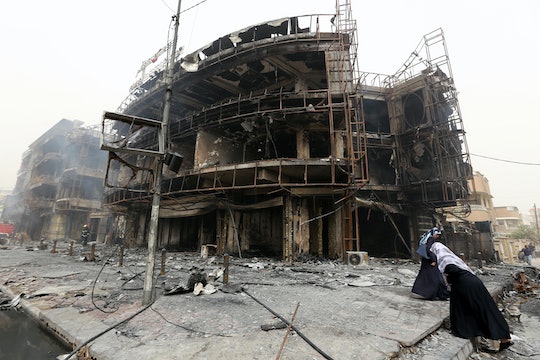 Who’s Behind The Bombings In Baghdad? More Than 130 People Were Killed

It was an attack that one United Nations official condemned as "a cowardly and heinous act of unparalleled proportions:" As many Iraqi families were out celebrating the close of the Muslim holy month of Ramadan Sunday, a suicide bombing killed at least 131 people in a busy shopping and amusement mall. Quickly answering the harrowing, infuriating question of who's behind the bombings in Baghdad, the terrorist organization ISIS claimed responsibility for the mass murder whose victims included many children. The group has not announced its culpability in a second, smaller bombing in northern Baghdad Sunday, which killed five people and wounded 16 more.

ISIS reportedly credited itself with the deadlier of the two bombings — during which a suicide bomber detonated a truck packed with explosives outside the shopping center — online, although the Associated Press could not immediately confirm the veracity of the claim, the outlet reported. Still, the group announced that it had targeted Shiite Muslims, and both of the attacks targeted commercial districts in Shiite areas, characteristics associated with the terror ISIS perpetuates.

Media outlets are reporting conflicting death tolls in the mall bombing, warning that numbers are expected to climb as more bodies are extracted in the rubble of decimated buildings.

According to The New York Times, the mall attack happened in Karrada, a middle-class neighborhood, and Baghdadi officials announced the arrest of a terrorist cell linked to it shortly afterwards. The possible identification of the terrorists involved in the planning and execution of the deadliest attack on the city this year does little to assuage the horror witnesses experienced.

A street vendor named Karim Sami told the Associated Press that one of his friends had been killed, one was wounded, and another was still missing. "It was like an earthquake," he said. "I wrapped up my goods and was heading home when I saw a fire ball with a thunderous bombing. I was so scared to go back and started to make phone calls to my friends, but none answered."

Iraqis undoubtedly experiencing a similar anguish railed against the country's Prime Minister, Haider al-Abadi, when he arrived on the scene. They pelted his convoy with stones, shoes, and bottles, angry that he has not provided the level of security he promised.

In late June, Iraqi forces reclaimed the city of Fallujah, which had been under ISIS control since 2014. A former army officer and security analyst in Baghdad, Jasim al-Bahadli, told Reuters that the most recent attacks show that militants are trying to compensate for that "humiliating defeat."

"It was a mistake for the government to think that the source of the bombings was restricted to just one area," he said. "There are sleeper cells that operate independently from each other."

And in even more horrifying news (because, yes, somehow that's still possible), an Iraqi politician named Mowaffak Baqer al-Rubaie told Al Jazeera that he believes attacks like these will become even more frequent as ISIS leadership scrambles to retain their recruits. "They are so desperate to boost the morale of their fighters, many of whom are leaving the group daily," he said.

And the past week has certainly illustrated the magnitude of the groups reach. Turkish authorities are blaming ISIS for a terror attack Tuesday on its main airport, which killed more than 40 people. And over the weekend, ISIS credited itself for a restaurant attack in Bangladesh that left more than 20 dead. The Baghdad bombings are just another example of the terrorists' truly despicable dedication to causing as much human carnage as possible.