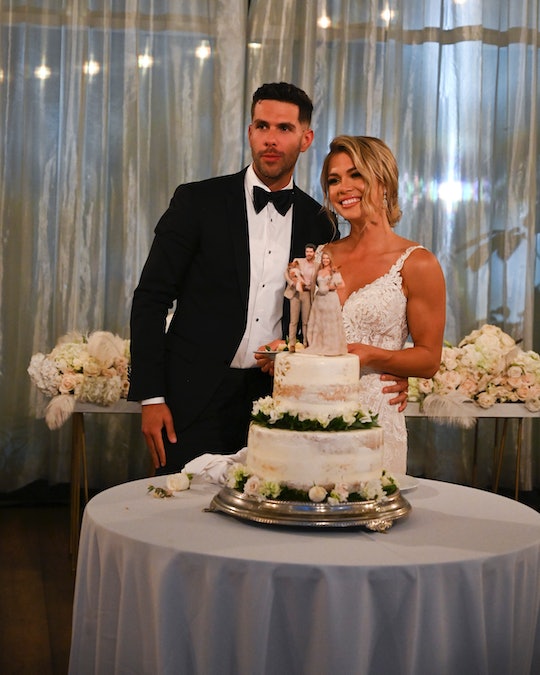 Bachelor Nation is full of former contestants who at one point or another swapped spit, hooked up, or at least slid into each other's DMs. It only makes sense that for the Bachelor in Paradise Season 6 wedding, a lot of these former partners would cross paths. It would be strange if they didn't. But the contestants returning for the Bachelor in Paradise wedding are about to inadvertently shake things up for those still trying to find love in Mexico.

There are several engaged or recently married couples in Bachelor Nation right now. And although I would love to see Becca and Garrett tie the knot on TV before anyone else, Krystal and Chris from last season of Paradise are returning to say "I do." It's appropriate, given that they met, fell in love, and got engaged on the show. With all of the other members of Bachelor Nation who are returning to Paradise to see them get married, however, they could be in for some messiness before, during, or after their nuptials.

Judging by the preview for Tuesday's episode, everyone currently on this season of Bachelor in Paradise will be invited to Chris and Krystal's wedding, because why not? Even if the bride or groom hasn't crossed paths with everyone in the Season 6 cast, apparently they will be in attendance. Chris and Krystal’s wedding is about to be a who’s who is former Bachelor stars. Unfortunately, that means unavoidable drama. I can already hear Chris Harrison calling this the most *dramatic* Bachelor in Paradise wedding yet.

In the preview, John Paul Jones finally loses his laid back persona when he confronts Derek for striking up a romance with Tayshia while JPJ was busy going on multiple dates with multiple other women. Arguing over partners on Paradise is nothing new, but doing it at a wedding just isn't cute.

Besides the drama of two contestants verbally duking it out, we can also expect to see Clay reunite with his Bachelor Nation ex, Angela Amezcua, who he dated prior to coming on Bachelor in Paradise. Annaliese mentioned Angela earlier this season when she called Clay out for moving on with other women in Paradise. The way Clay explained it, they broke up amicably and he had no reason not to pursue other relationships at this point. When they reunite before or after the wedding, fans will finally get both sides of the story.

Fellow Bachelor Nation couples Adam Gottschalk and Raven Gates and Kendall Long and Joe Amabile will also be back for the Bachelor in Paradise Season 6 wedding. And while I fully expect JPJ and Derek’s drama to darken the day just a little bit, I hope the rest of the drama stays out of the more important parts of the day. Seeing these Bachelor in Paradise success stories in the flesh might even help some current contestants have hope that they too can find lasting love and even marriage from being on the show.

As with most things on Bachelor in Paradise, the wedding will probably have drama peppered in throughout the romantic music and dramatic pauses. But I just hope Krystal and Chris aren't left with a wedding marred too much by an overabundance of testosterone and egos.