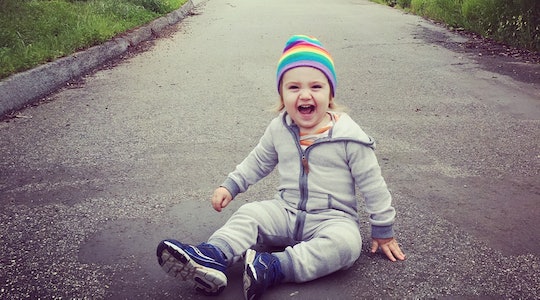 Also: "Baby Aluga?" when requesting Raffi's hit song "Baby Beluga," "Tickuh, tickuh, tickuh!" when tickling the bottoms of my feet while I desperately try to do yoga for FIVE FUCKING MINUTES in the living room, "Balella!" when he sees an umbrella, "Sadow!" when he sees his shadow, and "Uno, dos, tres, cinco, seis, siete, ocho, nueve, diez! Yay!" ("Amazing! What about cuatro, honey?" "CINCO. CINCO. CINCO." "OK WE'RE NOT READY FOR CUATRO YET.")

No. 2: ENDLESS HUGS AND KISSES. It's true that he's cultivating a resistance movement, but still, first thing in the morning, whenever we say goodbye, and last thing at night my son gives me as many kisses as I want and even climbs on top of me to give me kisses. When he hugs me, he pats my back as if he's comforting me. He kisses his stuffed animals, so when I'm driving I hear kissing noises coming from the backseat. He gives "besos" and "abrazos" on demand, both in person and over FaceTime. And he is too small to resist my barrage of hugs and kisses, so his screams of "No kiss!" and "No hug!" are futile (for now).

No. 3: I DON'T HAVE TO TALK TO YOU AT PARTIES. At 1.5, kids are too young to wander off by themselves, so I am allowed to walk away from you when you're in the middle of telling a story about what your kid was doing at my kid's age.

No. 4: WE DON'T HAVE TO RESEARCH SCHOOLS FOR THE NEXT THREE YEARS. Or we wouldn't, except we live in the Bay Area. But really: He's in a great daycare and unless everything goes to sh*t, we don't have to do anything until he's 5. BOOM WHAT'S PLAYING ON NETFLIX.

When he hugs me, he pats my back as if he's comforting me.

No. 5: HE CAN'T REMEMBER ANYTHING YET. This one I have mixed feelings about. On one hand, this is the happiest and most confident he's ever going to feel, and I would love for him to be able to remember this when he's in his mid-forties and divorced and trying to get a rock band going with the other dads at school. But it also means he won't remember the time he burned his thumb on a pan and the one or two times Mommy and Daddy might have made the mistake of trying to discuss their finances before bedtime.

No. 6: HE'S STILL SOOOOO FAAAAAT. He still has rolls everywhere! His neck, his thighs, his ankles, his wrists. He has an enormous tummy, or "panza," and he hands us rubberbands and smacks his belly and cries, "Panza!," demanding the game of shooting rubberbands at his pot belly that he learned at daycare.

No. 7: HE DOESN'T NEED ORTHODONTIA OR GLASSES OR A DRIVER'S LICENSE OR THERAPY YET. His body and mind are in good working condition, and until we've had the next 10 or 15 years to corrode both, we won't have to pay to reverse time and turn him back into a fat, happy baby.

IT'S LIKE HAVING A TEDDY BEAR FOR A ROOMMATE.

No. 8: I DIDN'T WANT TO HAVE SEX ANYWAY. I do, but I don't, because tired. Maybe I should call this one I HAVE SEX TO LOOK FORWARD TO.

No. 9: I GET MORE SLEEP THAN I DID WHEN I HAD A NEWBORN. When you have a 1.5-year-old, you are still flush with the memory of what it was like to be so sleep-deprived that basic hygiene and self-care went out the window and instead of a living room you had a "command center." This was the reprieve I'd heard about, and it is glorious.

No. 10: IT'S LIKE HAVING A TEDDY BEAR FOR A ROOMMATE. The way he pumps his fat little arms when he's running up the hallway, shrieking with laughter as he "tries" to get away from me. His sweet laughing mouth and seed pearl teeth and scrunched-up eyes. The way his whole diaper butt swishes back and forth. The way he reaches waaaaaaay up to open the refrigerator and the silverware drawer and the bathroom door when I'm trying to take a sh*t in privacy. How he lights up when I sit down with my breakfast and hurries over to sit on my lap so he can steal my toast. His fuzzy pajamas and smooth cheeks. His whole rumpled being first thing in the morning, and his heavy weight in my arms, since I can still pick him up, all of him, and hold him in my arms.