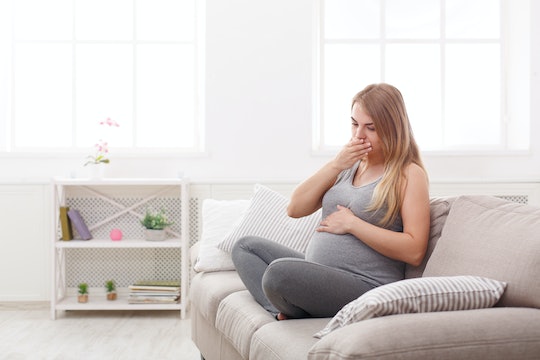 Experts Explain Why You Can't Seem To Stop Spitting During Pregnancy

Pregnancy hormones cause many strange changes in your body, including an increase in saliva production. It's not enough that you're battling morning sickness — now you're wondering, "Why am I spitting so much during pregnancy?" For a small percentage of unlucky women, this normal occurrence becomes a burdensome condition called ptyalism, which comes from the ancient Greek word for "salivate," according to the Oxford Dictionary of English. Baby Center pointed to nausea, heartburn, and environmental irritants as possible causes for all that extra spit, but "there is no clear explanation or underlying cause for ptyalism in pregnancy," says Dr. Adrienne D. Zertuche, an OB-GYN with Atlanta Women's Healthcare Specialists, in an interview with Romper.

Studies of ptyalism during pregnancy date back to the 1950s. Prior to that, ptyalism in pregnancy was associated with mental illness. In other words, the medical community thought women were just exaggerating their excessive spitting and the discomfort it caused. A 1956 study published in An International Journal of Obstetrics and Gynecology noted that excessive salivation is both "an extremely rare complication of pregnancy" and "should be differentiated from the mild increase in salivation which is a common finding in normal gestation." Ptyalism may be rare, but that's cold comfort when it happens to you. At least you know you're not imagining things — you are indeed producing more saliva than your pregnant friends without ptyalism.

The following year (1957), an article published in Obstetrics and Gynecology stated that ptyalism occurs in only about 2.4 percent of all pregnancies and it is unassociated with nausea. So yes, if you have morning sickness and extra saliva production normally associated with pregnancy, you're going to find yourself spitting more. But that isn't ptyalism, which involves a near constant need to spit or swallow saliva. This article also reported that ptyalism typically begins early in the first trimester and lasts for the duration of pregnancy. It may become more severe as your pregnancy advances and ptyalism can also get worse with each pregnancy a woman has.

"When women excessively salivate and spit in pregnancy, it is due to a condition called ptyalism (or sialorrhea)," Zertuche says. "Symptoms typically begin in the first trimester and improve or resolve in the second trimester, although sometimes they can continue until term. Sometimes women can produce as much as 1.5 to 2 liters of saliva daily." She notes, however, that while there is no clear explanation or underlying cause for ptyalism in pregnancy, "it is commonly associated with hyperemesis gravidarum (severe nausea/vomiting in pregnancy, accompanied by weight loss or other problems). There is also no cure for ptyalism, but women can sometimes get relief from chewing gum, lozenges, frequent water, frequent expectoration, and medications used to treat nausea/vomiting."

You've probably heard of hyperemesis gravidarum by now thanks to Duchess Kate, who has suffered from it throughout all of her pregnancies. However, as Zertuche explains, there is no one proven cause of ptyalism. It can also be frustrating and isolating to experience something rare and mysterious like it. If you think you have ptyalism, talk to your doctor about managing your symptoms and reach out to other women who've gone through the same thing. At least you can feel assured that it's only temporary.