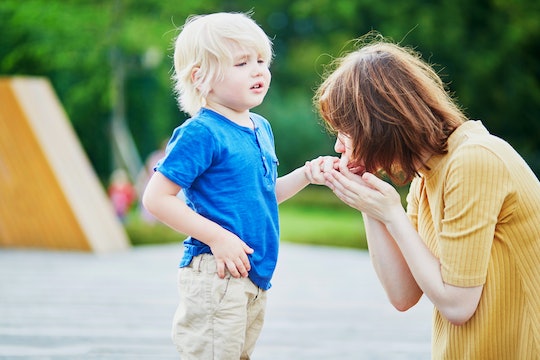 Here's Why Threenagers Are A (Frustrating, Totally Lovable) Thing

Throughout your child's life, you will encounter a list of warnings attached to certain ages. At 18 months, you may notice a sleep regression. The "Terrible Twos" come in with a bang and will leave you exhausted. Middle schoolers can try your patience in ways you never thought possible — oh, and don't forget they can be rather tricky. But one of the most talked about stages is that of a threenager — the combination of a toddler and a 13-year old that manifests itself into a 3-year-old. But why are 3-year-olds so difficult and how can parents reserve some of their sanity during the phase?

Jaime Malone, a licensed professional counselor at New Jersey-based Insight Counseling and Consulting, says as a counselor and mom of four young children, including a 3-year-old, the subject of threenagers is a constant topic of discussion.

"3-year-olds and teenagers actually have very similar developmental needs and challenges: autonomy," Malone tells Romper in an email interview. "The process of separation and individuation from parents is a gradual process from birth until they leave home. And if we think about what the ultimate goal of parenting is — to raise competent adults who can live in and contribute to our society — then this requires their ability to feel safe and confident in the world."

Malone explains that when a child is born, they are dependent upon their parents for everything. Through infancy, they begin to acquire some skills, like the ability to feed themselves, walk and move, communicate, dress themselves, and make decisions in play. But as they gain these abilities, they also learn something else — that they can make decisions. The result is a 3-year-old who can add insight and so, so much voice to making decisions ranging from what shirt to wear to their taste in foods.

Malone says it's important that parents support their threenagers in making decisions, saying things like "Do you want to wear the red shirt or the blue shirt today?" This way of offering a decision is also effective because, while it allows a 3-year-old to make a choice, the parent stays in control of the discussion by offering limited options.

"A lot of the pushback parents experience from their 3-year-olds — which feels a lot like teenager defiance — is the child's need to feel mastery," Malone says. "It's a sense of control and power. When parents can give their 3-year-old — or their teenager — the opportunity to make appropriate decisions, then parents might notice some of the defiant behavior diminishing."

Characteristics of 3-year-old behavior do indeed mirror those that are seen in teenagers, including lack of patience, indecision about wardrobe choices, and, as Kristen Hewitt jokingly — albeit quite seriously — noted on her blog, a parent's constant "fear of how to cut the shape of their sandwich or toast."

Malone says a parent's point of view is crucial in navigating the threenager stage. "If [the behavior] is seen as disrespectful and disobedient, a parent might be more likely to respond with frustration and punishment," she says. "But if a parent understands, 'this is just my kid finding his way in the world,' there will probably be greater patience and creativity in figuring out how to help your threenager feel confident in his world."

Malone says she often advises her clients, as well as her peers, to write down some of the struggles they are currently having with their 3-year-olds because "you're likely to find you're having the same struggles a decade from now, just the object of the conversation may have changed."

Moral of the story? Take your threenager issues in stride (as much as humanely possible). Because today's argument about what show to watch is tomorrow's discussion about late-night texting and Snapchatting — or whatever the nutty kids will have come up with by then.