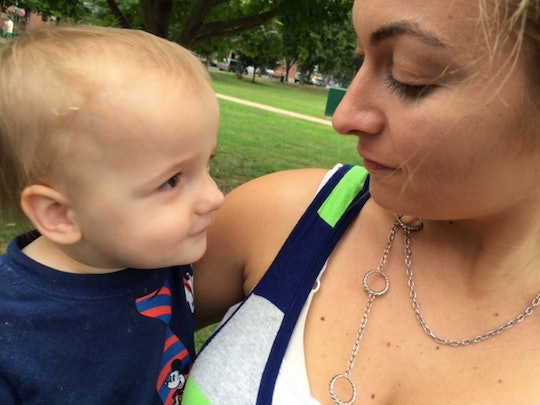 Why Being "Just A Mom" Is Nothing To Be Ashamed Of

Moms allegedly fall into three camps. There are mothers who refuse to be defined by the fact that they’re a parent, those who view parenting as an Olympic sport, and then there are women with kids who are like me. Some call us “soccer moms,” others say we’re what happens when a #basicbitch grows up and has kids. People eye our stretchy leggings, Starbucks cups, and Target shopping bags and think we have no ambition and probably give our kids too much refined sugar. I know this because regardless of the fact that I have several degrees to my name, I've had repairmen and even one awful pediatrician speak to me like I'm complete idiot. I even had the cable guy who installed our new cable box tell me:

If you can't remember all these directions, just have your husband call me he gets home.

They're right, in a way. I have no desire to write a book or start my own business, and the real reason I cut my kids' sandwiches with cookie cutters isn’t because it makes them happy, it’s so I can eat their grilled cheese scraps. I’m perfectly content to be that stereotypical soccer mom who sings pop songs in the car, and I have a very specific reason for that. For me, this was the life I always wanted but never thought I’d have.

Although my mom married an amazing man when I was in high school, my birth father makes the villains on American Horror Story look tame. My early childhood memories are tainted with his emotional abuse and drug use, and as a parent I cringe when I imagine my own children being exposed to some of the things I handled at their age. Instead of passing notes in science class, I tried to calculate the top speed at which my sister and I would survive if we had to jump from his car while it was moving. We didn’t play with dolls; we practiced squirming into a small crawl space under the staircase where we couldn’t be seen during one of his violent episodes. I didn’t pray for my parents to get back together once they split up — I prayed for them to stay apart for good.

There’s not a day that goes by where I’m not thankful they never have to worry about their father hurting them. It’s because of my past experiences that I’m grateful for what I have right now.

My teachers and the parents of friends all knew who I was by last name, as my father’s reputation around town preceded me. I didn’t daydream of being a famous singer or a ballerina, I only wanted to be normal, ordinary; boring. I envisioned a life for myself where safety was a guarantee, where a “bad day” was forgetting your thermos at school, not getting third-degree burns on your legs because your father was too high to realize that the soup he gave you was far too warm.

Eventually the courts stopped ordering that I visit with him, and with the help of a great therapist in college, I came to understand that I wasn’t responsible for his behavior, despite what he said to the contrary. I went to law school with the hopes of assisting children who were as helpless as I once was. As an attorney, I focused my career in family law, representing children in high-conflict custody cases, and couples involved in restraining orders and messy divorces, and the stories I heard were often familiar echoes of my own past. In some of these cases, I was able to help. Others keep me up at night even now, years later, because I wonder about those children and whether or not they’re safe.

As deeply as I loved my work, I left law behind (for now at least) to be a mom to twin 2-year-old boys. I don't regret it, either.

There’s not a day that goes by where I’m not thankful they never have to worry about their father hurting them. It’s because of my past experiences that I’m grateful for what I have right now, and why I’ll always roll my eyes when a privileged idiot claims giving a child a cookie is child abuse. Anyone who can say that with a straight face has obviously never seen real abuse.

I don’t begrudge any mother who wants an identity outside of having kids, and I couldn’t care less whether someone chooses to buy organic, breastfeed, co-sleep, or feed their toddler McDonald’s (expect that Wendy’s has better fries, so you should really go there instead). But just as I can respect someone else’s choices, I wish they’d respect mine. My life may seem boring to some, but for me, being boring, normal, and utterly average is exactly what I always dreamed of.