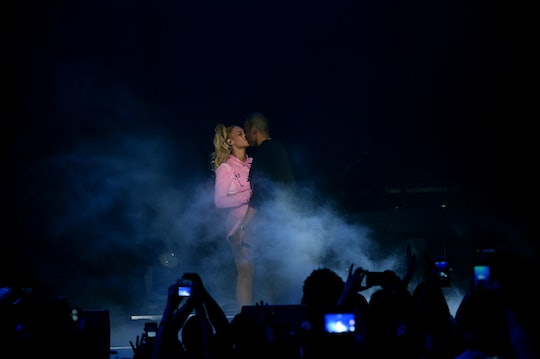 Well-meaning fans and conspiracy theorists alike have wondered if she is or isn't for years, but Beyonce's twins prove she's in the Illuminati once and for all. (And a preemptive no, I'm not joking about this; this is not a joke; I never joke about Beyoncé.) So we can finally, finally put this argument to rest. Rumors about Beyoncé being in the Illuminati have followed her around for most of her career. People have long-believed that Bey and Jay Z are in the 18-century intellectual secret society built on restricting the church's influence on public life and promoting gender equality. (Given that the year is 2017 and we are still having this conversation en masse all over the world, I've got about two million more names to add to the members list, TBH.)

Speculation that Bey and Jay were, in fact, devout followers spiraled nearly out of control when Beyoncé sang the lyric "y'all haters corny with that Illuminati mess" when she released "Formation" just about over a year ago. It seemed, at least where she was coming from, to put the rumors about the Illuminati to rest — it was "corny," the Queen said. But news of Beyoncé's second pregnancy with twins only gave new life to the age-old question: Is she?

Here's the clearest answer to question of the hour: Yeah, Beyoncé and Jay Z are probably card-carrying members of the intellectual association for gender equality and religious freedom. I mean, look at all they do. They stand up for civil rights! They stand up for freedom! For equality! OK, not sold yet? Well, how about this: Beyoncé is pregnant with twins, which means that by the time she is due to deliver her babies, Beyoncé will be mom to three kids. And we all know what three means, don't we?

According to HelpFreeTheEarth.com, "among the magical mysteries were the prime numbers (numbers that have no divisors other than themselves. These numbers, which included 2, 3, 5, 7, 11, 13, and so on were widely worshipped by the Illuminati cult in numerology, particularly when it comes for setting dates for events. These members of the Illuminati believe also that a chance of success is more likely if the same number is multiplied several times so they will schedule a special event on a date that has a run of three numbers."

Let's date a closer look at Beyoncé's announcement date, the most pivotal argument for her pregnancy confirming her Illuminati membership: Beyoncé announced she was pregnant with twins on February 1, 2017. Any of those numbers strike you as divisible by anything?

There's also the belief that Blue Ivy was named to coincide with their Illuminati beliefs. According to PopDust.com, Blue Ivy's name might mean "Born Living Under Evil, Illuminati’s Very Youngest." And if that's the case, I cannot wait to see what Bey names her two youngest children.

But because the date alone is not proof!!! enough!!! that an Illuminatist (??) is among us, let's consider the most telling piece of information: the need for triangular positioning at all times. Spot the triangle, friends:

"The triangle or pyramid (and its all seeing eye) is the symbol of the Illuminati," and well, there you have it. Here's hoping she names baby number two "Lumi" and baby number three "Nati." Wouldn't that be something?