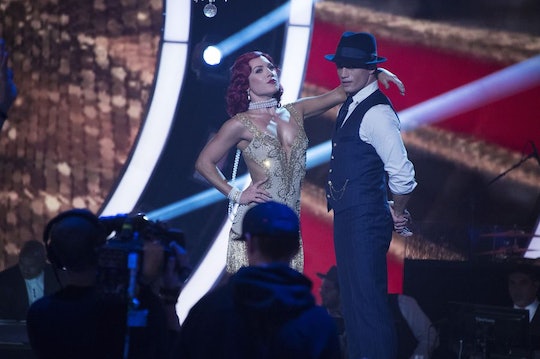 For some fans, ‘shipping a couple on Dancing With the Stars is half the fun of watching these dancing duos pair up and develop some amazing dance floor chemistry. So when Bonner and Sharna seemed to have that from day one, of course viewers immediately wanted them together. But that’s certainly not the only reason why DWTS duo Bonner Bolton and Sharna Burgess should date.

Dancing With the Stars definitely brought them together, but no one could have predicted the passion that seems to have ignited between the two of them throughout their chemistry-packed routines. But even when they aren’t dancing, Bonner and Sharna seem like they have this connection that goes beyond the ballroom floor. (OK, that might be the fangirl in me wanting these two adorable dancers to be together, but it can’t all be for the cameras, right?) At the very least, both Bonner and Sharna are single right now, which means that they’re both more than available to be together in a non-dancing capacity.

And while they’ve each said that playing up their chemistry for fans is part of the fun of DWTS, it’s hard not to wonder if there’s something more to all of the tender moments viewers witness each week when the pair steps out onto the dance floor.

Although neither Sharna or Bonner have confirmed any solid dating rumors, Sharna’s partner on DWTS from Season 23 spoke to Entertainment Tonight about his thoughts on the pair and, as it turns out, fans aren't the only ones who see something between them. Although James Hinchcliffe, Sharna’s IndyCar driver dance partner from last season, is still waiting to set up Sharna with one of his own friends, he said that he does see a spark between Sharna and Bonner. "There's something there for sure," he remarked. "Based on what I've seen, having not met him and not seeing the interaction in person, I would say that there's some interest there for sure."

Honestly, that’s good enough for me. But other than the obvious chemistry the two share on DWTS, Sharna and Bonner should date because they both offer something totally unique to a potential relationship with each other. Bonner is a Texas gentleman who grew up on a legit ranch and Sharna is from Australia with a lifetime of dancing and gymnastics experience. I don’t know about the whole opposites attracting thing or if this even means the two are opposite per se, but they’d definitely never get bored of each other and could teach one another new things.

They’re also both super into their families. While Bonner remains close to his grandmother (who has appeared in the audience), Sharna posted a photo of her mom on Instagram for International Women’s Day. She captioned it, "And!!! Happy #internationalwomansday to this one right here, the most important woman in my life, my woman crush everyday and my amazing mama. Love you Woo."

According to Us Weekly, Sharna is also an animal lover and apparently craves their attention over that of humans any day. As a guy who grew up on a Texas ranch and was a professional bull rider, Bonner can likely relate to that. But Bonner and Sharna should also date because can you imagine the kind of chemistry the DWTS pair would share if they were actually officially together? We'll just have to wait and see how this potential love story plays out as the season progresses.