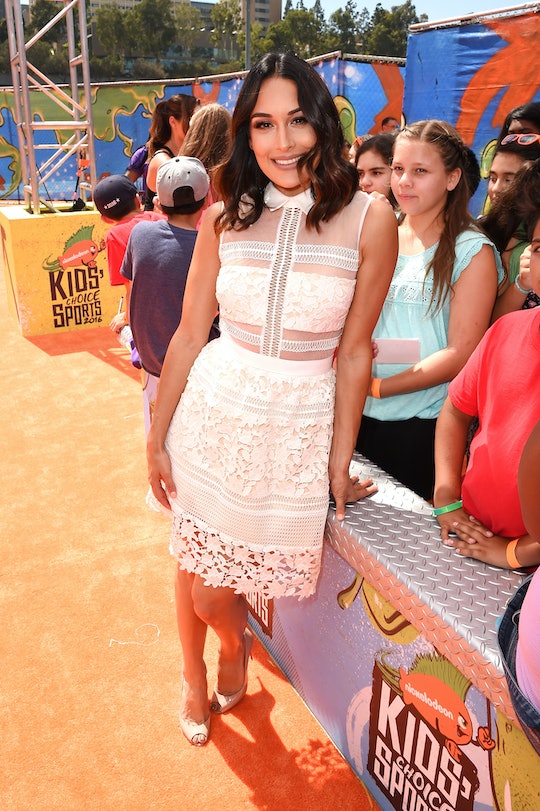 Becoming a mom can certainly turn one's world upside down. Everything from your schedule to your priorities to your way of thinking gets shifted — and the same is true for celebs, including wrestler Brie Bella. In particular, becoming a mom changed Brie Bella's views on vaccines, and the wrestler recently opened up about how learning more about vaccines affected her change of heart.

In celebration of World Immunization Week Field Day, and coordinated by Rotary and Red Nose Day, Bella, 34, candidly spoke with People about her change of heart when it came to vaccinating her 11-month-old daughter, Birdie Joe. “I was someone in the beginning who doubted vaccinations,” Bella admitted to People. “But I started educating myself and I started realizing how easy it is for kids to get different diseases and infections that they can’t fight off.”

She added that her initial hesitation had to do with a fear of vaccine injuries. “As a mother, that really opened up my eyes,” she continued in the same People interview. “The thing people are most scared about are vaccine injuries. I sat there and thought, ‘My daughter can catch something and I’m either dealing with death or a vaccine injury. I’ll take vaccine injury over death.’”

If you're unfamiliar with the term "vaccine injuries," here's what Bella is referring to. In the 1970s, people began to express concern over the safety of vaccines, as explained by the Centers for Disease Control and Prevention (CDC). Some people even sued vaccine manufacturers and doctors, claiming that vaccines caused injuries. Even though there was no scientific evidence proving a link between vaccines and injuries, those suing the manufacturers and doctors were awarded damages, according to the CDC.

Similarly to "vaccine injuries," some parents are concerned that vaccines can cause autism, as well as the MMR diseases: measles, mumps, and rubella. However, there is no scientific evidence that proving a link between vaccines and autism, as noted by the CDC, and multiple scientific studies have proven that. The myth goes back to a 1998 study by Dr. Andrew Wakefield, as noted in a paper by SAGE Journals. As the paper points out, 10 years after Wakefield's study was published, experts were finally able to prove that Wakefield was guilty of "ethical, medical, and scientific misconduct." And even though the study has since been disproven and discredited by the scientific community, it's evident that there are still some people who believe otherwise.

Vaccinations are incredibly important for children, as explained by the U.S. Department of Health and Human Services. Vaccines are proven to be safe and effective, according to U.S. Department of Health and Human Services, and they can protect children from a number of fatal diseases and help prevent the spread of disease, and more. Plus, getting vaccinated at a young age is vital, according to the CDC. Newborns are born with antibodies that come from their mothers, making them immune to certain diseases; however, as they grow through their first year, they lose this immunity and become more susceptible to catching diseases, according to the CDC.

It's great that becoming a parent inspired Bella to educate herself about vaccines — and it's clear that she's an amazing mom to Birdie. She also opened up about how she and husband Daniel Bryan, who is also a wrestler, are raising Birdie as a vegetarian — but as her daughter grows older, Bella will let her be in charge of her own body. “As of right now, I am [feeding Birdie a vegetarian diet],” she told People. “The day that Birdie asks me to try meat, I won’t deny it to her." She continued:

I’ll always let her know the things I believe in and why, but I’ll never push them on her ... I was blessed to be raised in a family where they didn’t push a lot of stuff on me. ... I was able to find who I am today and I want Birdie to have that. I’ll educate her on why I live the lifestyle I do, but if she asks for it one day I won’t make her feel bad about it and I’ll let her try it for sure.

Bella seems to have her daughter's best interests at heart, and there's no doubt that she will inspire her to chase her dreams one day.