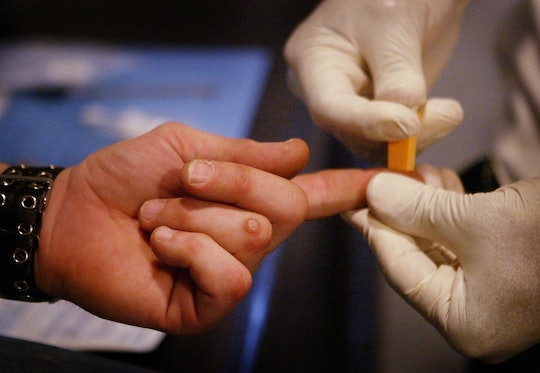 The Food and Drug Administration's official stance is that blood donation centers should not accept blood from gay men who have had sex with other men in the past year. It's a contested position, to be sure, and in the aftermath of a devastating Orlando nightclub ambush during which a gunman killed about 50 patrons and injured at least as many, reports began to circulate that a Florida blood bank was rescinding the regulation that gay men can't give blood in a terribly ironic situation, because the club that was attacked, Pulse, has been a haven for members of the LGBT community. The blood bank has since stated that the reports are false. But why are gay men banned from donating in the first place?

Update: The FBI has updated the death toll to 49 victims. The shooter was also killed.

While blood banks were lucky enough on Sunday to be able to turn away the long lines of donors for the remainder of the afternoon and evening after the mass shooting, following an outpouring of community support, the question still lingers.

From 1983 until last year, gay men were universally banned from giving blood, assuming they'd had "sexual contact" with another man anytime since 1977, NBC News reported in 2013, because they were considered to be at a higher risk for contracting and spreading some sexually transmitted diseases like Hepatitis B and AIDS.

Before March 1985, there was no way for the FDA to test donated blood for HIV. Couple that with the devastating AIDS epidemic that was killing gay men all around the country at the time, and it's somewhat understandable that officials were reluctant to accept blood they believed has the potential to affect other patients.

But with modern developments like the creation of effective blood tests came criticism that the lifetime ban on gay men was archaic and homophobic. It's now known that men who have sex with other men aren't the only ones who can contract AIDS, with even the American Medical Association opposes the lifetime ban. Other countries have lifted the ban on gay men from giving blood, and in December in 2015 the FDA revised its rules. Now, gay men are permitted to donate blood — provided that they have been celibate for at least one year.

After the tragedy in Orlando, Slate's Joseph Mark Stern wrote that the existing rules amount to a "fundamental distrust of gay men":

Because of these rules, most gay men are now legally forbidden from doing the one thing that could directly aid those injured in their community—for reasons based not on science, but on homophobia and fear. As their friends perish from bullet wounds, gay men in Orlando today are condemned to do nothing but watch helplessly.

When the FDA first imposed the lifetime ban on gay men, not much was known about the way that AIDS spread, but, 30 years later, the stricter regulations on this populated are widely considered to be outdated. Now, however, William Kobler, board member of the American Medical Association, believes that the lifetime ban was "discriminatory and not based on sound science." The FDA, on the other hand, said in a press release that the updated one-year deferral policy aligns with the most up-to-date scientific research to keep the U.S. population safe from HIV.

The horrific shooting in Orlando — which is officially the deadliest mass shooting in the history of the United States — awakened so many emotions for so many people. Amid the anger, fear, and sense of helplessness, many wanted to give blood, and the fact that many gay men are ineligible to help their counterparts in this most basic way rankled. There are many other ways to help the Orlando shooting victims, but the horror of the shooting inevitably reminded people of what many see as an injustice, as well.

CORRECTION: A previous version of this article inaccurately identified Dr. William Kobler as the president of the American Medical Association. He is a board member of the Association. Romper regrets the error.