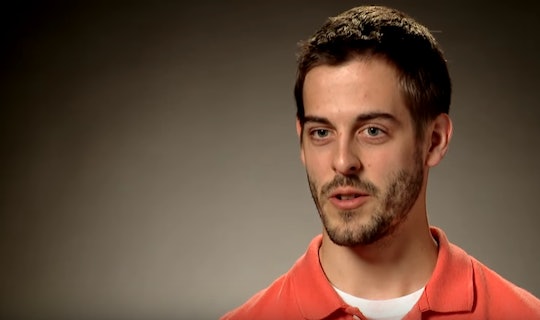 As a journalist, nothing irks me more than the First Amendment being invoked in an erroneous way. It often happens after a controversial figure says something horribly offensive, and faces heat for said horrible offense. You'll hear the cries of "free speech," "censorship," and "snowflakes," as if that somehow frees a person from criticism or consequences. But it doesn't, especially when a private entity is involved. That's why Derick Dillard being "fired" from TLC doesn't violate the First Amendment.

Last week, TLC revealed that the network had cut ties with Dillard after he once again attacked fellow TLC star Jazz Jennings on Twitter. Dillard's transphobic tweet criticized Jennings' parents for "promot[ing] their agenda," and repeatedly misgendered the I Am Jazz star.

He wrote on the social media platform earlier this month, "I pity Jazz 4 those who take advantage of him in order 2 promote their agenda, including the parents who allow these kinds of decisions 2 be made by a child. It’s sad that ppl would use a juvenile this way. Again, nothing about him, just unfortunate what’s on tv these days.” Dillard hasn't responded to Romper's requests for comment.

According to Page Six, TLC published a statement on Twitter informing fans that Dillard hadn't been involved with Counting On in awhile. The network also revealed it had cut ties with Jill Duggar's husband altogether.

We want to let our viewers know that Derick Dillard has not participated in Counting On for months and the network has no plans to feature him in the future. We want to reiterate that Derick’s personal statements do not reflect the views of the network. TLC is proud to share the story of Jazz jennings and her family and will continue to do so.

TLC/Discovery Communications did not respond to Romper's request for comment about Dillard's recent tweets.

Of course, Dillard and fans of the Duggar family have defended his transphobic comments as "free speech," according to the Hollywood Gossip. Some have even gone as far as to claim that his firing violated his First Amendment rights. But here's the one thing about the First Amendment: It does not apply to private entities, of which TLC is one. As Lifehacker so eloquently explained, the constitutional amendment protects people's right to free speech and freedom of expression, among other liberties, "against an oppressive government that would seek to squash those rights in its own self-interest."

In depth, the First Amendment reads,

Congress shall make no law respecting an establishment of religion, or prohibiting the free exercise thereof; or abridging the freedom of speech, or of the press; or the right of the people peaceably to assemble, and to petition the Government for a redress of grievances.

In other words: If a government agency were to fire you for making a criticism that's protected by the Constitution, that would violate the First Amendment. Or if you were to be arrested for having a bumper sticker that your town's sheriff doesn't like, that would violate your First Amendment rights. But being fired by a private television network because you made hateful, transphobic comments? The Constitution doesn't protect you there, despite how loudly you may yell "but free speech" into the void.

Dillard's latest tweet, though, isn't the first time he's attacked Jennings on social media. In August, he wrote on Twitter that transgender people are a "myth." and that Jennings' show is an "oxymoron." He also misgendered the young trans activist. It's pretty hateful stuff from the supposed Christian. And to expect that hate to be protected against a private entity that can choose to distance itself from that hate is not only ridiculous, it's a gross misinterpretation of constitutional rights.