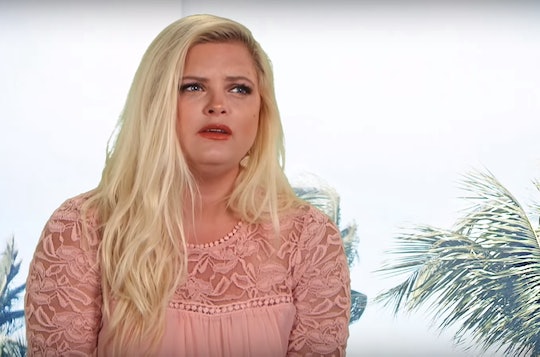 Season 2 of Floribama Shore might be coming to a close, but the drama is never ending. The cast has been through their fair share of verbal brawls, but in a recent episode, Aimee took things to a whole other level with someone outside of the house, resulting in her arrest. Viewers may have been wondering after last week's episode why Aimee got arrested on Floribama Shore and it might have been for something more serious than a verbal altercation at the bar.

According to court documents obtained by Page Six, Aimee allegedly grabbed another patron at Ms. Newby’s Bar and punched her. After this, the documents said, Aimee and the rest of the Floribama Shore cast and crew left the scene, only to be stopped in traffic by police who then arrested Aimee. With the cast's nightly outings and general love of partying, it's actually surprising that it took this long for one of them to make a mistake like this while filming.

Page Six reported that the alleged victim is not only suing Aimee for damages, but also the production company behind MTV's Florabama Shore. Given the show’s success, though, I doubt the case will have any negative repercussions on the show itself.

On last week’s episode of Floribama Shore, viewers saw Aimee and Nilsa get into a confrontation with a Panama City Beach local who called both women "ratchet" and continued to have it out with them before things got physical. Before things went south so fast, Nilsa was also seen saying that they needed to dip out, as the other housemates had reached their alcohol limit at that point. Maybe if they’d left sooner, they could have avoided the other bar patron, but after things allegedly got physical on Aimee’s end, the night came to a screeching halt with her arrest.

This wouldn't be the first time Aimee has gotten physical with someone on the show, though last time it was with her fellow Floribama Shore star, Gus. During the group’s trip to New Orleans this season, Aimee was fed up with Gus and Nilsa’s on again/off again fling and, she said, tired of seeing her friend get hurt by their roommate. Things came to a head when Aimee and Gus had a disagreement about time management in napping and then getting ready to go out before their dinner reservation. After Aimee called him a "weak b*tch" and he made a negative comment about her weight, she lunged for him. It was, in a word, messy.

Since then, the pair have more or less made up, but this arrest was a little different than two friends having a forgivable spat.

Since the incident, no one from the show has said anything about it or what happened in the aftermath of Aimee’s arrest. I don't think this will affect the future of Floribama Shore, though. Jersey Shore, which paved the way for the southern version of partying 20-somethings, featured its own cast arrests in the early days. After a bar fight during Season 1 of Jersey Shore, Ronnie was arrested in the middle of the street (because where else?) for aggravated assault. In the infamous Season 3 episode "Where’s The Beach?," Snooki was arrested for disorderly conduct as she drunkenly looked for the beach in the middle of the day.

As we all know, Jersey Shore went on to last several more seasons and eventually spawn Jersey Shore Family Vacation. While Aimee’s arrest on Floribama Shore doesn't meant the end of this show, it definitely won't be a Season 2 memory she’ll look back on fondly.