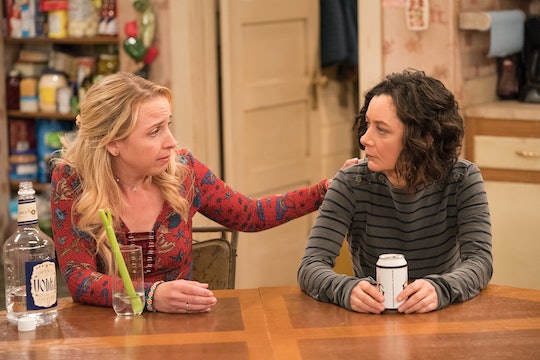 Johnny Galecki is set to finally make his one-episode appearance as David on Roseanne this season, but there are still a handful of questions about his relationship with Darlene, since it was made clear that the longtime couple split years ago. So, why did David and Darlene break up on Roseanne? The revival has some questions to answer in the coming episodes, especially where Darlene and her little family are concerned. At the very least, we know that they’ve been split up for a while. In the description for Episode 5 titled "Darlene v. David," it says, "David unexpectedly shows up for Harris' birthday after being absent for years, forcing Darlene to re-examine their relationship and the rest of the family," so the breakup definitely happened years ago.

There haven't been many clues about David and Darlene’s separation in the Roseanne revival yet, other than the fact that Darlene moved back home because she lost her job and not because they split up, which means that she was on her own as a parent for quite a while. But there has been more than one mention of Mark’s death and since he was David’s older brother, there’s a chance that the death took a toll on David, which drove a wedge between him and Darlene.

Granted, the brothers were never super close, but that fact may have actually been what caused David to feel the pain of his passing even worse at the time. It might have been too much for David to bear and eventually, he and Darlene decided to take some time apart. Of course that doesn't explain why the time apart had to last literal years, but it could be the reason why David and Darlene went their separate ways.

At the end of the original series, David and Darlene had spent time living in both Lanford and Chicago, but in the revival, Darlene had raised her children in the big city and made the difficult decision of moving them home to Lanford. If she and David had spent the better part of their marriage in Chicago, there’s a good chance that whatever David’s job was at the time could have taken him out of town. In the original Roseanne, he’d landed a job as an artist in Chicago. If he was still working in a similar profession years later, it’s possible that he got an opportunity to work elsewhere and eventually, it negatively impacted his marriage to Darlene.

From the time David was introduced on Roseanne in Season 4, he was the perfect opposite to Darlene’s character, but somehow their shared love of art and similarly amazing curly hair made them work well together. When the revival premiered and Darlene appeared to be a single mom with two kids from their marriage, it was heartbreaking, to say the least. Frankly, I don't want to be in a world where David and Darlene don’t work out. Right now, nothing has been said about why they broke up or if they’re divorced or merely separated, but chances are, Episode 5 will have plenty of answers to help make sense of the fact that somehow, they’re no longer together on the show.

Getting David for just one episode this season is literally nowhere near enough to flesh out his story, but Galecki definitely seems as nostalgic as fans for the former Roseanne power couple. He was quick to re-post a clip Sara Gilbert (who plays Darlene) had posted on Instagram from one of the more iconic interactions of David and Darlene from the original series. While it doesn't confirm that Galecki will be back for more episodes than just the one, it does give fans hope that if the actors care enough about the relationship, maybe there’s hope for their future on the show.