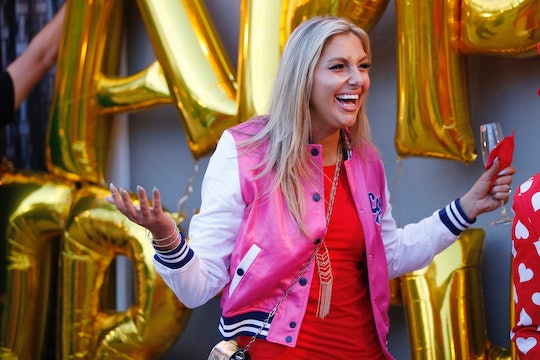 Gina Kirschenheiter Is Still Friends With Her Ex After 'RHOC'

Gina Kirschenheiter might be a newcomer this season in The Real Housewives of Orange County, but you probably already have a ton of questions about her. Like, for example, why did Gina Kirschenheiter get a divorce? The RHOC star has been candid about her private life on the show. And in a recent episode, Gina revealed that there are actually several reasons behind her divorce with her husband, Matt Kirschenheiter.

She explained to her fellow RHOC stars that because Matt works and lives in Los Angeles during the week, the distance became too much for them as a couple. But, when pressed, she got a little deeper into the why of it all. Gina explained that she and Matt also filed for divorce because they both realized they got married too young and that they’re different people now.

"We still are really good friends, but we’re not in love," she admitted on RHOC. "I know what I know and I'm actually making a good decision before it turns into a bad situation and I don't want that for my children." Gina and Matt have three children together, Nicholas, Sienna, and Luca, and according to Page Six, Gina allegedly asked for joint legal custody and sole physical custody of their kids when they officially filed for divorce in April.

In the September 17 episode of RHOC, Gina was certain that despite divorcing Matt, they would be "best friends for the rest of [their] lives," but they just grew apart over the years.

Gina and Matt were married for almost 10 years before announcing their split ahead of the RHOC Season 13 premiere and Gina’s debut on the show. Before she revealed to the other women the reason behind their divorce, though, she sat down with with Andy Cohen to explain her relationship with Matt and why they decided to officially end things.

"It was a perfect storm of things that happened, it’s complicated," she said on Watch What Happens Live. "I think it was our time and if I knew I was gonna get divorced, I probably wouldn't have [gone on RHOC]."

As fans know, Matt spends most of his time not only working in L.A., but also living there in his own apartment, and spending his weekend time with Gina and their kids back home. This would probably put a strain on any relationship, and although it wasn't the only thing that contributed to their divorce, the distance did become an issue in Gina and Matt’s marriage.

Some reality TV divorces come with the trappings of a Lifetime movie full of lying, cheating, and general deceit, but the end to Gina’s marriage before RHOC was a slow burn. "Matt and I were just coming out of the baby, baby, baby-phase and were recognizing that our relationship had run its course," Gina told People. "At the same time, he had taken a new job in Los Angeles and was living there during the week. And I had made this commitment to come on this show." She also said that she’s "a completely different person" than she was when she got married at 23 and that while they grew apart over the years, they’ll always be close for the sake of their children.

It honestly sounds like the most amicable and healthy divorce ever. And although it isn't yet final — Gina told People that there is still tons of paperwork to do — fans will continue to get to know Gina on her own on RHOC throughout the proceedings.