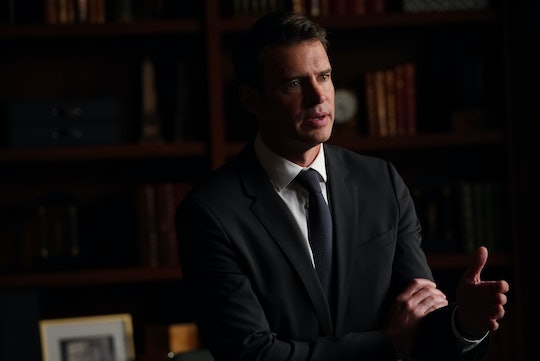 With just two episodes left until Scandal is over for good, there are apparently still plenty of twists and turns to come to keep fans on their toes. Just when we all thought Cyrus was the big bad, Jake basically stole the show in Thursday's episode and totally flipped the script on viewers. It's not like he was ever totally innocent or anything, but why did Jake kill Vanessa on Scandal? It was clear that something was going to happen when Vanessa appeared in the episode at all after being MIA for quite a while.

To be honest, I sometimes forgot she even existed, but that's probably because Jake wasn't shy about making moon eyes at Olivia and Mellie at one point or another. But when Vanessa popped up during Scandal in Thursday's episode, "People Like Me," it was clear that she was going to be used in some way by the end of the episode.

I don't know if I expected Jake to kill her off so quickly, but he's been known to take a few lives without flinching. That being said, it was still sort of surprising, especially as he'd claimed throughout the episode that what he was working on in the White House was for the sake of both him and Vanessa and their future. But as he told Cyrus at the end of the episode, as they shared a drink over Vanessa's dead body, he had to "dissolve" the partnership he's made with her, as it was no longer mutually beneficial.

Back in Season 5, Rowan orchestrated Jake and Vanessa's relationship and eventual marriage since he deemed her to be the right kind of future political wife for his prodigal son. Given her connections and family, she was able to find much of the work Rowan and Jake were doing in order to get their presidential candidate to win. Of course, Olivia later brought Jake over to her side of things, but he remained married to Vanessa and as he explained in Thursday's episode of Scandal, they forged a partnership.

But when Vanessa realized that she was being kept in the dark, once again, she confronted Jake, going so far as to call him "the vice president's b*tch." I'd say that line sent him over the edge, especially since it would seem that he's calling the shots rather than Cyrus, but Jake clearly no longer had any use for Vanessa so he did what literally no one else would do and killed her.

While Jake killing Vanessa on Scandal was yet another heinous crime on his part, it was also a smaller piece of the big picture moving forward. It's not like he was ever above killing people or ones close to him, but it showed Cyrus that he thought nothing of killing his own wife, who dared to question their "partnership." In short, Jake made it clear to Cyrus that they were "just getting started" and that he "would hate to dissolve our partnership as well." Personally, I'd probably heed the warning from the guy who'd just nonchalantly murdered his own wife in their home, but I'm pretty sure that was the whole point.

This leaves Cyrus as a pawn in the grand scheme of things as the series ends and Jake as the apparent villain in charge. I wouldn't call Cyrus innocent by any stretch of the imagination, but Jake is much more dangerous than Cyrus ever was, and that's saying a lot. Killing Vanessa was likely just the beginning for him.