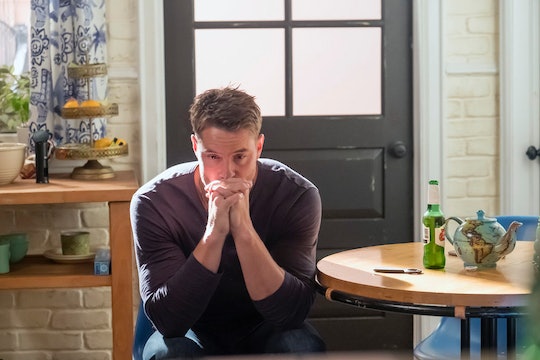 Kevin Made A Drastic Decision On 'This Is Us'

I’ll be the first to admit that the way Kevin and Sophie’s reunion played out last season was fair at best. The show brought together this couple who’s clearly had a lot of history and kind of slapped them together in the present with the hopes that viewers would accept the relationship, when really, there was so much missing. But between them, there was still that lingering love, so why did Kevin break up with Sophie on This Is Us? He has a lot to work through on his own and although he broke up with her on Tuesday’s episode in a not-so-great way — by telling her that the thought of their future makes him miserable — it was probably for the best. At least, for right now.

Kevin’s trouble with addiction was hinted at earlier in the season when Kate mentioned that Kevin is just like Jack and although that could have been referring to their shared stubbornness, the line was said as a sort of voiceover while Kevin took his pain pills for his leg injury. Which, as it turned out, was also the result of a flare up from an existing high school football injury that found him relying on pills back then too. And after resisting the need for his pain meds this time around, he finally gave in so that he could still be part of the Ron Howard movie, but that’s where the problem began for him.

From there, it was pretty clear that he had already started to rely on the pills and the apparent addiction is likely a big part of why Kevin broke up with Sophie. On the surface, it definitely seems like he broke things off because he doesn’t see a solid future with her, with his nightmare about being a horrible husband and father and all, but when it comes down to it, Kevin’s issues lie with himself more than anyone. And before he can really be with Sophie again, as in live in the same city and start their life over together, he needs to work on himself and I think he sees that.

Kevin is Jack Pearson’s son, so he already has the tools to be a great husband and father someday. But he sees himself as a pill-addicted, struggling actor who has always had issues with his self-confidence. More than likely, in Kevin’s eyes, he’s not really deserving of Sophie and their potential life together. When it all comes down to it, it’s legitimately not her, it’s him.

But for everyone still rooting for these two kids, Alexandra Breckenridge (Sophie) told Cosmopolitan that there’s hope for Kevin and Sophie as a couple. "Kevin and Sophie, they’ve loved each other since they were kids. They’ve been off and on since they were children. I think that eventually it’s gonna work out for them, or at least I hope it does," the actress said. "I think they have a bond that’s kind of unbreakable."

When Kate announced her pregnancy to Kevin, instead of him being immediately excited for his twin sister, the weight of the news seemed to hit him pretty hard. Not because he was going to be an uncle once again, but clearly because it made him look at his own life choices. And right now, the biggest choices Kevin has been making involve feeding into his addiction, which doesn’t make him ready to be there for Sophie right now.

Of course, that doesn't mean that Kevin won’t be able to recover from his addiction by the end of the season, but until he can do that, being with anyone (let alone the former love of his life Sophie), is going to be challenge. As it stands they were never really able to work on their former relationship issues before they started things up again. Sure, we got a couple of episodes in Season 1 of Kevin following Sophie around the city to try and woo her back, but since then, they haven’t even lived in the same place long enough to really know who they've both become during their time apart. And before he can truly start over with Sophie, Kevin needs to work on Kevin before he’s too far gone with his addiction.